Hey, you, get me off of your cloud (it’s way too expensive) 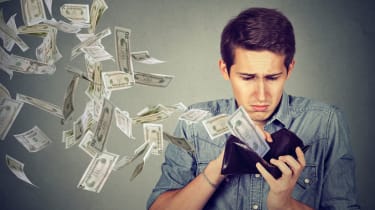 Regular readers (hello, mum) aren't used to finding nuance in this column. I heartily subscribe to the Danny Baker maxim: sometimes right, sometimes wrong, always certain. But I've been batting this issue around in my head for days and I'm still not sure whether I want to commit to another year's subscription for Adobe's Creative Cloud or pick up the phone and let someone in the Adobe call centre have it. So, I'm going full stream of consciousness on the page and hopefully I'll reach a conclusion by the end of it. Strap in.

Adobe has gradually tightened its grip on my metaphorical testicles over the years. After getting hooked on the gateway drug of Lightroom, I was persuaded to part with a tenner a month for the Photography pack so that I could also get Photoshop. Then I reached the point in my journalism work where having access to InDesign was unavoidable, so I stumped up an extra 20 per month to add that to my portfolio. Then Adobe did something cunning...

Around this time last year, it offered me an unbelievably good deal. I could have the entire Creative Suite for a one-year-only special price of 26.68 per month cheaper than what I was paying for the Photography pack and InDesign separately, plus throwing in Illustrator, Acrobat and the dozen or so other apps that make up the full Creative Suite compendium. I'll take it for a year, I told myself, then go back to the original configuration when they shove the price up to the regular 50 a month in a year's time.

In the meantime, of course, I've grown faintly addicted to Acrobat, not only for the brilliant mark-up tools that allow me to proof magazine pages of digitally, but for the way it autofills the endless stream of PDFs I have to wade through as a director of the mighty Lewes FC. And though I don't use many of the other Creative Suite apps a lot, I love playing with Audition, Muse and Dreamweaver, and I'm planning to redesign my business site using Portfolio.

So, there I was, ready to sell one of the kids to Angelina Jolie and commit to the full 50-a-month package when Adobe did something that got me very irritated. It laced my gateway drug, the one that hooked me on Creative Cloud to begin with: Lightroom.

Now we have two versions of Lightroom: a more lightweight, tablet-friendly, cloud-oriented version called Lightroom CC and an ominously named rebrand of the desktop app to Lightroom Classic CC. Adobe insists it has no plans to do away with Lightroom Classic, but supporting two versions of the same app is rarely sustainable, and a deeper dive into Adobe's new pricing suggests that it's incentivising customers to cut off Classic.

Look at the revamped Photography packs, for example. There are now two versions priced at a tenner a month: one that includes Lightroom CC and a whopping 1TB of online storage for your photos; one that includes Lightroom CC, Classic and Photoshop but only a meagre 20GB of storage. It's gapingly obvious that Adobe wants photographers to chuck all their photos onto its cloud, instead of storing them locally. That's the whole "edit anywhere" ethos of Lightroom CC. And once Adobe has your photo collection, it's got you, in the same way Google has you by holding ten years of your Gmail archive.

I've always been a software subscriptions sceptic. Given the dearth of game-changing features over recent years, I'm still struggling to comprehend why I'm paying Microsoft 8 a month for Office 365. Adobe got me because a tenner a month was far more affordable than several hundred quid up front for the standalone applications. Now that's not even an option the latest versions of the apps are only available on subscription.

It's a dangerous time for Adobe to be railroading customers. It's had the luxury of no discernible competition in several of its key markets for yonks. That's beginning to change with the emergence of credible rivals such as Serif's Affinity Photo and Designer. They're very decent, direct hits on Photoshop and Illustrator respectively, and they both cost less outright than a single month of a full Creative Cloud subscription.

Reluctantly, I suspect I'll cave in and hand my 50 a month to Adobe for Creative Cloud. But Adobe would be ill advised to think it can whack customers in the keep net indefinitely. Adobe's move to subscription software "riled a lot of people," according to Serif's Ashley Hewson. I'm not sure about that, but pulling stunts such as changing the entire nature of the much-loved Lightroom will. Adobe has to be careful that it doesn't airbrush itself out of the market.