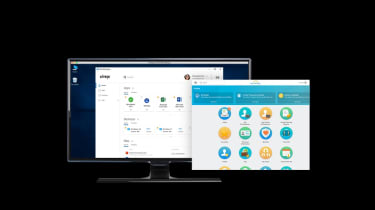 Citrix has announced a slew of features for its flagship Workspace platform that aims to better engage employees and boost their day-to-day productivity.

By the end of the year businesses should expect to benefit from tools such as a central newsfeed and an AI-powered digital assistant, the virtualisation firm announced at its annual Synergy conference, hosted this year in Atlanta, Georgia.

The new 'intelligent experience' package, according to the company's CEO David Henshall, aims to tackle the epidemic of workplace disengagement, which has been caused by an over-burdening of enterprise tech designed and built for just the '1% of power-users'.

"This is truly a worldwide epidemic," said David Henshall during his keynote address, citing Gallup research that showed 85% of people globally are disengaged with work.

"Imagine if only 15% of your teams are completely aligned and driving your business results," he told an audience comprising the press, analysts and countless Citrix customers.

"When you couple with the fact that in most organisations employees are the single largest expense; that means by definition employees are your most valuable asset. But they're generally not being treated as such.

"Imagine if any other asset in your portfolio was operating at 15% capacity. You guys would be all over that really driving change across the board."

The main reasons behind this include a saturation of workplace apps and ecosystems that have over-burdened 99% of users who just need simple and functional interfaces to get things done.

Whether employees use an internet page with a series of links or a web portal with different apps, users are spending far too much time cycling between systems, as well as authentication tools. This "takes up human RAM" trying to go back and forth.

Henshall added that the company's mission is to give back one day per week to employees, which he claimed that users needlessly waste on retrieving information that could be provided by automated software.

Citrix has pivoted its Workspace platform, launched in 2018, to address these mounting concerns with user interface (UI) upgrades and additional features. These have been heavily inspired by the consumer tech user experience, which the company concedes is pulling well ahead of business-oriented IT.

Features like one-click purchasing, for instance, have been slow to make their way to businesses, according to the company's chief product officer PJ Hough, and have led to enterprise software "failing" employees.

"There are so many of these things we are familiar with but that haven't necessarily surfaced inside our work environments," Hough said.

"We've suddenly become so used to having recommendation engines whether it's in our collections of books or the TV shows we watch or other forms of media that get more tuned to our needs over time."

He added the digital revolution that has already happened for mobile-based user experience had not yet occurred for enterprise platforms, with Citrix hoping to position itself as a pioneer in this area.

The revamped Workspace will be powered with micro-app integrations that will populate a customisable Facebook-style newsfeed interface. This will pull details integrated apps by Google, Microsoft and SAP, among others, and provide integrations.

Users will also find a newly-developed digital assistant, or chatbot, to assist employee queries in the system, which Hough sees as a manifestation of the company's major bid on machine learning and artificial intelligence.

Moreover, there will be a mobile device-based platform featuring the newsfeed interface front-and-centre, heavily influenced by mobile social media experiences.

Citrix's new 'intelligent experience' capabilities will be made available to businesses generally in the third quarter of 2019 but have been rolled out to beta users from now.