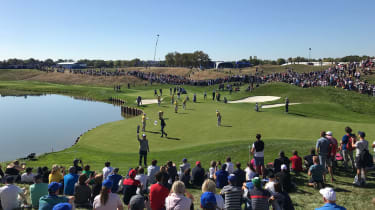 The Ryder Cup, which pits the best European golfers against their American counterparts, is an oddity in the sporting event calendar. Attracting both fans of the sport and those who aren't normally interested in golf, the tournament generates a vast and diverse audience, whether that's at the course itself or on television and mobile.

Gone are the polite, clapping galleries that usually greet players at tournaments, replaced instead with rowdy, partisan crowds using chants and songs to spur on the home players, with every mistake by the opposition greeted with similar enthusiasm.

Although the tournament is held in a single location and only lasts for three days, its technological needs are vast, with 250,000 spectators attending during the week and millions of viewers watching worldwide. 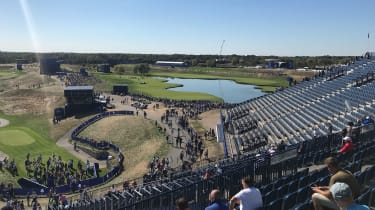 Aside from the annual French Open, host course 'Le Golf National' on the outskirts of Paris lies relatively dormant for the rest of the year. Michael Cole, who joined the European Tour as CTO in early 2018 and assumed the same role for this year's Ryder Cup, has worked to transform the site into a 'connected course', something which has proven difficult given its lack of permanent infrastructure.

The 'connected course' sees the integration of wired and wireless into a single network that powers operational functions, hospitality, the media, and public Wi-Fi. This strategy is not just to ensure a smooth tournament, but to boost fan engagement and open new revenue streams.

The Ryder Cup needed a vast network that was capable of stretching across the entire 150-acre site, while also being incredibly secure and simple to manage. To this end, it enlisted the support of HPE Aruba and its partner Ultima.

Part of this decision came down to HPE Aruba's edge networking products, which were capable of delivering on the Ryder Cup's need to make more use of its data. Organisers were also sold on HPE's potential for scalability, allowing it to reliably switch from supporting 20,000 people on practice days to 60,000 during live tournaments.

"Part of the reason we went the Aruba route is the sheer flexibility and adaptability to take the infrastructure and use edge topology to prepare it for the additional stress on the network," Cole explains.

The network covers more than 85 football pitches and comprises 700 access points, 130 switches and 200 kilometres of fibre (15km of which is underground). This all works together to power 430 television screens, 150 phone lines and 18 jumbotrons. 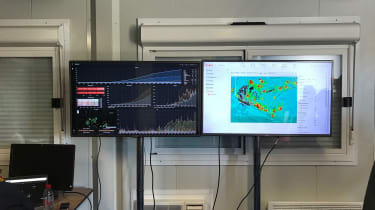 The core network resides in the Network Operations Centre (NOC), where engineers have complete visibility over its performance, including live heat maps to highlight heavy network traffic or those additional capabilities running on top, such as retail services and CCTV cameras.

Being able to see high footfall helps organisers ensure there is enough catering in a particular part of the site, while IoT inventory management and buggy beacons allow them to see where key assets and personnel are located. Team buggies are excluded for security reasons.

IT Pro's visit to the site coincided with the opening ceremony, giving us an opportunity to see the strain that a congregation of spectators in one area places on the network. Fortunately, if a piece of hardware goes down under that strain, network operators can send the GPS coordinates to an engineer who can repair or swap the parts. And, because the equipment uses Software-Defined Networking (SDN), the new part would behave the same and wouldn't require additional configuration.

"We're in a good place," says Cole. "Earlier this afternoon I was showing some tech partners who are familiar with the Olympic world around the site and they couldn't believe how complex everything was. I feel like what we've created is a smaller Olympic Park."

Media connectivity is one of the most important functions. The tournament's media centre hosts 1,200 accredited members of the press, without whom there are no news articles, radio broadcasts or social media posts to promote the event. 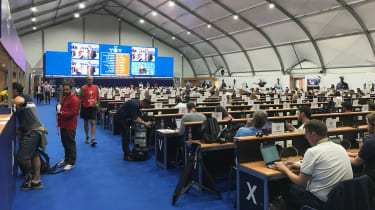 Many journalists often carry mobile Wi-Fi devices with them as the networks at events are often overloaded and fail regularly. Such devices are allowed on the course but are banned from the media centre, although the organisers hope that journalists and broadcasters will be pleasantly surprised.

The site has been tailored to meet the requirements of the media. The bottom floor houses the written press, while the upper floor is home to official photographers. The former need rapid download speeds, while the latter require high upload capabilities to send images of the event around the world.

"This is the highest priority of the golf course," says Steve Budd, head of the Ryder Cup media centre.

Cole's remit at the European Tour has seen him tasked with transforming its technology operations, including infrastructure, digital capabilities and data management, in recognition that it sees itself as an entertainment company looking to appeal to more geographies and a wider demographic.

"Golf has had an image problem," he admits, referring to the popular image of stuffy golf clubs and an ageing playing base.

To rectify this, the European Tour is looking to create new formats that will attract new fans to overhauling its website and applications with content and data-driven experiences. Game scoring alone accounts for more than 20,000 data points per tournament. Organisers hope this additional data generation will allow for more detailed analysis of each tournament.

"We wanted to increase this and now we collect seven times as many [data points] such as club lie and yardage to the hole," he explains. "Over the course of the season, that amounts to millions of data points. For 2019, we will collect even more data from the course - shot-by-shot in real time - to make it available to commentators."

Edge computing can play a pivotal role in analysing this data quickly in any part of the world. This data-driven future is a vision shared by Ryder Cup organisers and is a reason why golf as a sport has reversed its position on mobile devices.

"As recently as 2010 we didn't allow mobiles on the course, so from being an anti-mobile environment, we've gone completely the other direction," Tim Shaw from the Ryder Cup's commercial team tells IT Pro.

"The mobile phone was the golf administrator's curse but then we realised this was a data sport. It was the early days of smartphone camera and footage that could breach broadcast agreements. Then they realised it was an absolutely fruitless activity."

This year's mobile app offers text, audio, video and social content to fans while also offering additional features to spectators at the course, helping them to engage with the tournament and generate revenue. For example, data is now being used in the generation of new types of sponsorship deals.

"The needs of the Ryder Cup are the same as any other enterprise but with the added intention of not just having fans as passive spectators but bringing them closer to the action," adds Gilles Thiebaut, head of HPE France. "With connectivity around the course, we can get a lot of data points and the organisers can create new commercial services and fan experiences."

These new fan experiences will "absolutely" include Augmented Reality (AR) and Virtual Reality (VR) applications, but Cole plans to be a follower rather than a leader.

"My background is from the Olympics, so I lean towards tried and tested technology," says Cole. "We'll see what works in other sports and bring it to golf."