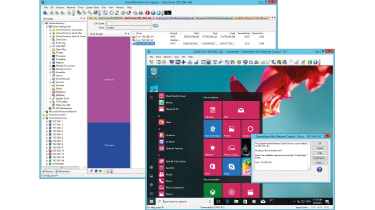 SMBs that want a remote support solution that's ready to go out of the box will find Solarwinds DameWare an excellent choice. Whereas most competing products require an agent permanently installed on every supported system, DameWare can do most of its work without one.

Solarwinds also offers two choices. The standalone version primarily aimed at smaller businesses with most of their client systems contained on the LAN, while the Central Server version targets larger organisations that want to extend support services beyond their firewall.

Your choice will be determined by the level of remote control services you want, as the standalone version includes the Mini Remote Control (MRC) tool which is accessed directly from the DameWare console. Central Server goes further; it includes Proxy Server and Mobile Gateway Server components to provision secure remote access to clients from iOS and Android mobile devices.

The standalone version is easy to deploy and we had it installed on a Windows Server 2012 R2 host in less than a minute. The console presents a simple Windows Explorer-style interface which presents a list in the left pane showing all systems discovered on the local network.

We found a vast number of remote support functions can be conducted without loading an agent. After setting our default login credentials, we chose a system from the console's left pane and a large drop-down list provided instant views of running processes, hard disks and storage properties, the event log and much more.

We could load a remote command prompt window and if the Windows remote support service isn't running on the target system, DameWare will offer to start it. Likewise with registry editing, as it'll also start the Windows remote registry service for you.

This latest version only sees some minor fixes, so hardware inventory is still unremarkable as DameWare only lists basic information such as its CPU, memory, graphics and so on. Each time you request a software list, it'll query the remote system but the details shown are more extensive and can be exported as a CSV file.

A minor complaint is that a quick access tab is loaded at the top of the central window every time you select a tool. These aren't closed down when you select another one so it's very easy to end up with 10 or 20 tabs loaded if not kept carefully controlled.

Basic remote control sessions can be run within the DameWare console using RDP, while the MRC tool provides a separate user interface with plenty of buttons for functions such as chat, view only and system reboots. It also simplifies file transfer operations by loading Explorer and offering menu options for quickly copying files between guest and host.

Mac support is limited to remote control and we had no problems using MRC to connect to our macOS Sierra clients. It uses the standard VNC service so all we needed do was enable screen sharing and protect access with a password.

DameWare is a top choice for supporting Active Directory (AD) environments, as the console provides direct access to all domain objects including containers, groups and users. After pointing it at our Windows AD controller, it listed all objects and allowed us to add or modify AD users or groups, unlock accounts and reset passwords.

Despite its busy console interface, DameWare is a great choice for growing businesses as its technician-based licensing makes it very affordable and highly scalable. It's a cinch to deploy and its agentless architecture means many support tasks can be swiftly completed without the need to load a remote control session.

Despite its busy console interface, DameWare is a great choice for growing businesses as its technician-based licensing makes it very affordable and highly scalable. It's a cinch to deploy and its agentless architecture means many support tasks can be swiftly completed without the need to load a remote control session.