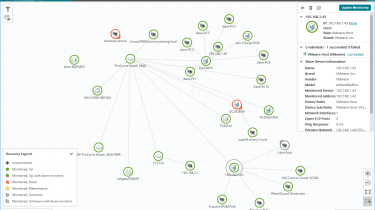 Ipswitch has pulled out all the stops with WhatsUp Gold (WUG) 2017; it's been redesigned to amalgamate all features into one console. Issues with previous versions were the number of different consoles you had to hop between for network discovery, WUG server configuration, mapping and management.

Ipswitch has moved WUG 2017 to a new points-based licensing scheme. One device costs a point regardless of the number of elements, while monitoring applications or grabbing NetFlow data costs ten points for each app and flow source.

WUG editions have been changed as well with the Basic version including discovery, SNMP performance monitoring, alerting, reporting and inventory while Pro enables WMI and wireless monitoring. The Total version adds monitoring for flows, virtualized environments, applications, clouds and storage, but you can purchase these add-on packs separately for the Basic and Pro editions.

The new web console runs an integrated discovery wizard which is easier to use than its predecessor. It steps through defining IP address ranges, expanding the scan to virtualization hosts and wireless networks, adding access credentials and scheduling it to run regularly.

It's fast too, with an SNMP seed scan of our lab subnet taking only six minutes. The My Network tab is now a workspace with an interactive map and customisable dependency links showing how systems are connected together, while colour-coded icons instantly reveal those in trouble.

You don't even need to go to the main Analyze page to view system details, as selecting one from the map brings up a window revealing details such as CPU, memory and disk utilization.

WUG offers a choice of 19 alert actions ranging from playing a sound or sending an email to running a script or taking snapshot of a VMware VM (but not Hyper-V). These are linked to policies where you can ask for an alert to be issued if a device comes up or goes down.

The Analyze tab replaces the busy ribbon toolbar from WUG 2016 where everything is now accessed from one drop-down menu. The Home dashboard provides an overview of monitors in alert states while the Top 10 view shows systems with the highest CPU, memory, disk and network interface traffic.

We created custom dashboards by choosing the number of rows and the information we wanted placed in them. They are very fiddly to manipulate and we prefer the SolarWinds NPM method, as we find it easier to customise its dashboards.

The Virtualization Monitor plug-in takes over from the old WhatsVirtual app but our VMware VMs now all had to be running for the discovery task to find them. The console then displayed all details about our VMware host plus plenty of information about running VMs and their resource utilization.

Hyper-V monitoring is an issue with WUG 2017 as although it could identify our host, it was unable to discover its VMs. This will be remedied in the WUG 2018 version and after installing an early beta version, we were able to discover and monitor our Hyper-V VMs.

The APM (application performance monitor) module keeps an eye on a wide range of business apps such Exchange, SQL Server, Active Directory and the WUG host. It discovered the apps we had running in the lab, allowing us to monitor their key attributes and use APM profiles to assign actions such as restarting a service.

Virtualization support is a work in progress but this radical refresh does make WhatsUp Gold 2017 much easier to use than previously. We found it capable of providing plenty of very accessible information about our network, and the new points system makes it more affordable for SMBs.

Virtualization support is a work in progress but this radical refresh does make WhatsUp Gold 2017 much easier to use than previously. We found it capable of providing plenty of very accessible information about our network, and the new points system makes it more affordable for SMBs. 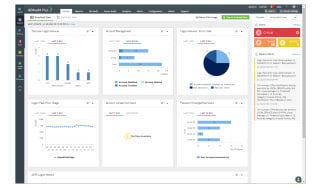