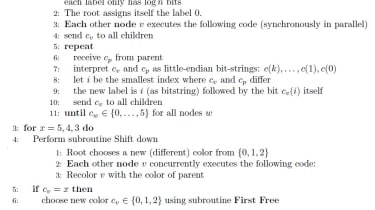 Coding is a complex language used to program computers and software, and as such can be difficult to read. To the uninitiated, it can resemble a mess of letters, numbers, characters and abbreviations that's undecipherable. This is where pseudocode can help.

With digital transformation happening all over the world and in almost every industry, the need to code is high, learning it in-depth isn't always possible. With pseudocoding, users can program software or autonomous machines far easier and without hours of learning new languages (which is what coding essentially is).

Instead, pseudocode offers an easier, informal guide that describes the principles of language the user is trying to learn, rather than trying to make sense of an entire page of the script.

With pseudocode, users can create a rough outline of what the language is attempting to do when launching an action within a program, which is then transformed into executable language. This is a sparse version of the program, without any of the jargon that usually comes with it, but one that allows the uninitiated to understand its basic principles. A major feature of pseudocode is that it gives as much detail as possible, but in a manner that's easier to digest.

Pseudocode is not designed to be read and encoded by machines, but to be examined and considered by people, so the often-high barrier to understanding a particular language can be lowered. System-specific code, and some subroutines of the program, app or algorithm, are therefore left out, but the formatting and structural norms of a piece of code will be kept.

There are no formal standards, or necessarily a style', for pseudocode because it's by-design only written to be understood by whoever comprises its audience. In many cases, the writer may borrow some structure or terminology from a conventional programming language but it's not necessary.

In this case, you could see pseudocode as effectively a more talkative and descriptive take on traditional programming languages, which helps make it easier to understand for people who might only be familiar with a select number of languages.

With some pseudocode, it's possible to create a program that can convert the language into its associated programming language.

Why is pseudocode code used?

This form of coding is often used to map out or pre-plan how a program will work before then translating it into a real language.

It's another way of planning; in that it could replace a series of flowcharts and unified modelling language charts that show how an algorithm or system works, as well as its key aims. This is especially useful for people who'd ideally want to ensure the core code is foolproof, and that whatever it is eventually translated into has a fixed point of reference in relatively plain English.

Pseudocode can also help to spot any potential flaws in the code before an app or algorithm is written out in full, which lends itself to a far more efficient process in the longer-term. When it comes to patching any errors in future, for example, the process could be much smoother.

Beyond the practical benefits of pseudocode, programmers often use pseudocode as a point of reference to translate a piece of code from one language to another, as it documents the underlying functions and aims of a program; almost like a translatory aid. But it can also be helpful to add any additional functions, in terms of visualising where these may fit into the overall program.

So where are you likely to see it? Pseudocode is often found in scientific publications or textbooks where it can be used to help outline specifically how certain algorithms can be deployed in certain tasks and use cases. Overall it's useful for straightening out how a function would work for any users who aren't necessarily versed in a particular language they're working with at any given time.