Microsoft will integrate LinkedIn more tightly with Office and Outlook 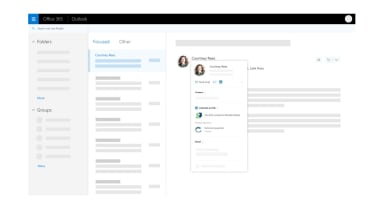 Microsoft is pushing professional networking service LinkedIn into more of its Office apps, including Outlook, Excel and PowerPoint.

While LinkedIn might lack the appeal of Twitter or Facebook in everyday use, it is still a much used professional networking tool and one that Microsoft saw potential in, having bought LinkedIn for $26 billion in June 2016.

Since that purchase over two years ago, LinkedIn has remained fairly separate from Microsoft's productivity software suite, though in 2017 is had some minor integration with Microsoft Word in order to make writing and posting a CV on LinkedIn a more straightforward task.

But Microsoft has revealed it has been building upon those efforts and will mix LinkedIn into other parts of the Office suite.

One such example is enabling Outlook users to co-write documents in Excel, PowerPoint or Word with their LinkedIn contacts, and naturally make it easier to share documents created in Office apps on LinkedIn. The integration also aims to surface interesting LinkedIn information about people on the same meeting invites sent through Outlook, reported Thurrot.

"Over time, you can also expect your networking experience on LinkedIn to be improved and enriched with information from your Microsoft account. For example, LinkedIn may suggest that you connect to some of your Microsoft contacts," Microsoft noted in its LinkedIn support pages.

Redmond has yet to reveal a timeline for when such integrations will roll out, but LinkedIn looks likely to have a more prominent role in Microsoft's software in the near-future, much like Cortana and Skype have been made into native tools in Windows 10.