Why your staff are key to Windows 10 migration 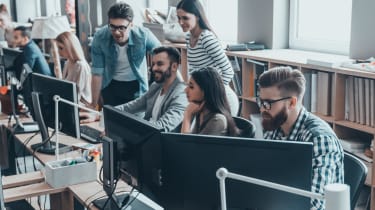 Migrating the operating system at your company is much more than a matter of whether your existing desktop systems can handle it, or the cost of a fleet of new computers. How your staff respond to the software change and cope with the new features are equally important, alongside whether they can continue to work with the applications they favour in the way they choose. That's why putting your staff at the centre of your migration process is essential for a successful Windows 10 upgrade.

First of all, don't simply impose the upgrade. If your company is still running Windows 7, moving up to Windows 10 is bordering on overdue, since this operating system will cease to have Microsoft support in January 2020. But that doesn't mean the upgrade should be rushed. Cristian Cornazzani, Commercial Sales Lead at Microsoft, suggests deploying Windows 10 to a sample of employees from each department and getting feedback, which will help you discern whether you have problems or not with each use-case scenario.

This approach has a double benefit. Not only does it uncover potential issues, so you can address them prior to the full rollout, but you can also begin the training process at the same time. You can start working out what your employees will need to know about the new operating system so they will start using it productively as soon as they get it. You may even find that some employees find new features and ways of working that are worth making part of the training package for all new users.

Although new features should be a business benefit of upgrading to Windows 10, the added long-term security will be one of the most important aspects, and one key to this is that your employees actually make full use of the extra options. The highest-profile new addition is Windows Hello, a biometric system that employs fingerprint reading or facial recognition to log into the operating system. Staff may need some minor training to use this, but once they've got the hang of it, logging in will be faster and more secure, because there is no danger of employees choosing a simple password when their finger or face is always with them and can't be stolen or guessed.

One reason why corporates have been reluctant to upgrade from Windows 7 is that, until recently, a Windows 10 security patch might also contain a .NET update that could break custom business software. Windows 7 used to keep these patches separate, so they could be rolled out only once validated. Since the October 2018 version 1809 release, however, Windows 10 has also kept .NET patches separate, so that these can be validated with in-house applications whilst the other security patches are rolled out as soon as they arrive.

In a related fashion, Microsoft has also changed the cadence of updates for Enterprise and Education customers, so that each Autumn feature update is supported with security updates for 30 months from release date, whilst Spring feature updates get 18 months of support. So if you don't want the training burden of updating your staff on the considerable changes that arrive with the major feature updates, you can skip a few but remain just as secure. This will be another way you can get your staff on board with Windows 10. If they've heard about the turmoil caused by some Windows 10 feature updates, they can be given reassurances that this will not be happening on their work systems. Familiar features will remain unchanged for at least two years.

Considering how WannaCry exploited vulnerabilities in Windows 7, Microsoft introduced specific ransomware protection for Windows 10 called Controlled Folder Access, which protects local folders most often attacked by ransomware, and further protections have been added with an Office 365 subscription. Controlled Folder Access was released in version 1709 of Windows 10 in October 2017. This prevents access to nominated folders by unauthorised software, so ransomware won't be able to encrypt your files. It only applies to those nominated folders. Nevertheless, ensuring your employees' main document folders are protected by default will give them, and you, peace of mind against ransomware attacks.

Best of all, far from being a source of staff reluctance, an operating system upgrade with accompanying brand-new devices could actually mitigate against one of the biggest current potential security risks. The tendency towards Bring Your Own Device (BYOD) has been spurred by employees finding that the computing equipment supplied by their own company wasn't up to their needs. If your work laptop is old and decrepit, but you have a brand new one at home, you may well use that one instead. Of course, this has led to major security holes, because this device won't be as locked down as a system that is entirely administered by your in-house team. Data stored on it may not be backed up, and a home laptop could become a bridgehead onto your network when used in the office. However, if you give employees a state-of-the-art upgrade running the latest operating system, they are likely to use that instead.

In the long term, the Microsoft plan is to deliver Windows entirely as a service so that updates can be managed much more centrally, and Windows 10 is already the first step in that direction. The regular major feature releases essentially replace the new versions of Windows that used to arrive every three to five years, but in a more iterative fashion. This means that companies don't need to see an upgrade to Windows 10 as an upheaval that will be followed by another wholesale change a few years later, as used to be the case. Instead, the upgrades will be much more gradual.

With IT staff on the Windows Insider Program, updates can be tested for up to four months before official launch, and you could even get end-user staff input at this stage that can be fed back to Microsoft. The result will be a much more secure Windows experience, where staff resistance to updating is greatly reduced compared to previous incarnations of the operating system. After all, your staff are the ones using the systems, and the happier they are, the more productive they will be.