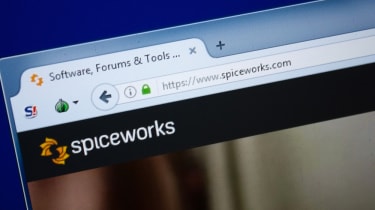 Spiceworks has today announced a series of updates to its IT management software, including new AI-powered intelligence features, on-prem versions of its cloud-based software products and more tools to help simplify the IT purchasing process.

The company announced the news as part of its annual community conference SpiceWorld. Spiceworks will analyse data from the posts and comments on its vast and popular forums, as well as usage data from its suite of free IT management software. This will be used to produce 'actionable insights' throughout its portfolio, Spiceworks said.

Its cloud-based Help Desk Online software, for example, will be able to flag potential problems based on patterns in ticket submission, such as a high volume of connection-related tickets indicating network issues. In addition, the software will offer to connect users with a relevant vendor, if the problem requires a technology solution.

On the forums themselves, Spiceworks will be highlighting popular products that IT professionals are speaking highly of within the community, as well as letting users see which products are most popular within organisations of a similar size.

Spiceworks' inventory management tool is also getting an update, including a tool that alerts you when vendor contracts are about to expire, and the ability to alert users if they've got too many software licenses.

"You can also understand if you're under-deploying on licences, where, say, you may have purchased 50 licences, but you're only using 23 of them," said Marta Kelsey, Spiceworks' director of product management; "That will help you guys understand if you need to reduce your licences and maybe save some money."

One somewhat surprising announcement was that the company is creating an on-premise version of the aforementioned cloud-based helpdesk software, which new users can download and install as a virtual appliance as of now. The company is still working on migrating the ticketing system from the cloud version, however, so existing users will have to wait.

Although the company already had an on-prem equivalent of Help Desk Online, Spiceworks itself refers to it as "legacy", and admits that it's somewhat outdated by now. The new on-prem software supposedly runs 20 times faster than the 'legacy' Help Desk 7.5, and can handle more than 13,000 tickets with 8GB of RAM and a quad-core CPU.

The reason Spiceworks is bucking the enterprise IT trend by taking a cloud-based application and creating an on-prem version, the company said, is because many of its users do not have access to the required bandwidth to make SaaS applications feasible. Indeed, the company also teased a stat from its annual 'state of IT' report revealing that 98% of its community still maintain some on-premise infrastructure.

"You're still seeing this pretty significant amount of demand from people who are not very cloud-friendly for many different reasons. Could be regulation, it could be as simple as the boss not being comfortable," said Francoise Caron, executive director of IT products at Spiceworks.

"Believe it or not, the number of people who are still telling us, I live in the middle of nowhere, and I don't have enough bandwidth and my users struggle. Every time we have whatever in the cloud, it's always slow. It's never good enough. But we have a few cores and CPUs with VMware or whatever hypervisor that we could dedicate to that, and we would love to have the same code available for on-premises."

According to Caron, Spiceworks is looking into creating on-premise versions of some of its other products, such as its inventory monitoring software, and is considering growing its product portfolio with a revamp of its long-neglected network monitoring software.

"We're not committing to anything or promising - but we're definitely promising that we're looking at such an option," he said.