From 19 November, users can purchase Power Platform licenses without consulting their IT departments 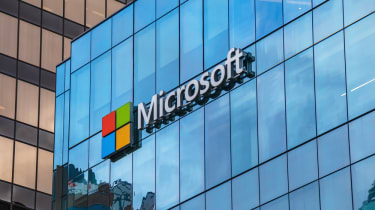 Microsoft has released further details around a contentious self-service scheme for Power Platform applications, which gives end-users the capacity to bypass IT administrators to purchase certain product licenses.

From 19 November, most commercial cloud customers in the US can purchase Power BI, PowerApps and Flow licenses on their own accord without having to consult with their IT departments.

The first software to become available through self-service will be Power BI on 19 November, followed by PowerApps and Flow from 4 December, according to FAQs released by Microsoft.

"As a result of digital transformation, traditional roles are changing," Microsoft said.

"As employees become more independent and better versed in technology, we've seen increased demand from both users and organizations to enable users to buy subscriptions on their own.

"The intent of the self-service purchase option is to enable users to develop their own solutions to unlock productivity and drive business impact, while respecting organisations' data governance and compliance."

Customers will be able to make self-service purchases through the Power Platform websites, and will only need to provide their Microsoft Azure Active Directory (AD) credentials to verify their identity. They'll then be given the choice over which subscriptions they wish to purchase before providing payment card details.

The scheme won't work for Azure users within government, non-profit, or educational organisations, and neither will the scheme be available outside of the US initially. Guest users, too, cannot make self-service purchases.

Although Microsoft has provided its rationale behind self-service, the scheme is not likely to be popular among IT administrators, who will wish to retain full control and awareness over deployments within businesses.

With shadow IT a major concern across businesses, given the rise of practices such as bring your own device (BYOD), self-service schemes such as this are likely to exacerbate the headache that IT admins face.

The force of feeling has been voiced by Github users providing feedback to the news, with one user comment titled "Are you completely insane?", and reading: "Please rescind this immediately, businesses have strict procurement processes in place for a reason". 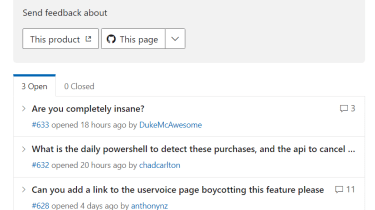 A sample of feedback from Microsoft users and IT admins

IT Pro discussed the potential implications for such a policy with its own IT department, with administrators expressing unease at the principal of being forced to relinquish control. They suggested the self-service scheme could also lead to a loss of control over IT budgets, depending on how pricing is structured. The ability to set permissions and access controls could also be undermined.

Microsoft has said the individuals who buy the subscriptions through self-service will be responsible for payment, although these can still be paid for through company finds, including IT budgets, depending on the policy of individual organisations.

Microsoft has also said IT administrators can see self-service purchases through the Microsoft 365 admin centre console, alongside all other subscriptions purchased through central procurement channels. The details available to them include the product, purchaser name, subscription period, order history, purchase price and assigned user.