Microsoft has reversed its stance on a controversial self-service scheme that would have let employees within an organisation bypass their IT departments to buy licenses for three Office 365 products.

Earlier this week the firm announced that its self-service purchase scheme for Power Platform products would roll out from 19 November. This would allow users to pick up licenses for Power BI, PowerApps and Flow using just their Azure Active Directory (AD) login details and own payment details, without having to consult with their IT departments.

Microsoft's initial rationale was that the self-service scheme follows a model for modern working habits, in which employees crave more autonomy over choosing which tools and services they use.

However, news of the scheme sparked widespread anger among the IT community, with many arguing it would undermine official procurement policies and potentially cause chaos with company budgets.

Principally, though, it meant IT administrators would lose control over who could purchase and install Office 365 software, with critics claiming it would worsen the issue of shadow IT, already a major business headache. 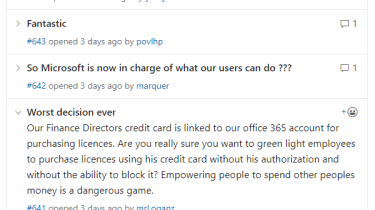 Microsoft issued an update yesterday, in light of the response, suggesting it would now provide IT admins with a way of turning off self-service purchasing within their organisation via PowerShell. Details behind the exact mechanism, however, weren't offered, and the self-service scheme is otherwise still going ahead.

The rollout date, however, has also been pushed back from 19 November to 14 January 2020 in order to give businesses more time to prepare for the changes, the company added.

Microsoft maintains that the scheme will create a greater sense of independence for employees, and meet a "demand from both users and organisations to allow users to buy subscriptions on their own".

"In today's world, end users and departments are increasingly seeking out and buying technology solutions on their own," the firm said in its updated FAQ.

"We've received numerous requests from these customers to enable self-service purchase of Power Platform products. We're responding to this customer need while also balancing the needs of IT administrators, who often at times lose visibility and control when individuals within their organisation adopt third-party solutions without their knowledge."

Microsoft will still launch self-service purchasing from 14 January in the US, starting with Power BI. These changes, however, mean IT admins can restrict users within their organisations from participating, effectively undermining the principle of self-service altogether but restoring the status quo.