Let’s stick to the software diet

Bloatware is a problem software developers need to deal with 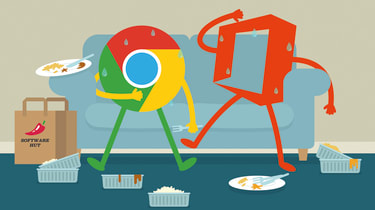 Let he who is without a chicken biryani’s worth of extra body flubber cast the first stone, but there’s an awful lot of flabby middle-aged software out there.

I’ve been in this game long enough to remember when Google Chrome was the nimble upstart, making established browsers such as Internet Explorer and Firefox look positively leaden. Nowadays, it’s Chrome that’s more likely to be binge-eating your computer’s memory, while new browsers such as Microsoft’s revamped Edge (ironically built on the same code base as Chrome) make it look like a wheezing old boiler.

Google repeatedly makes promises to make Chrome more lightweight, less memory-hungry and less prone to chug your laptop’s battery like a shot of vodka, but I’ve read more of those press releases than I’ve had hot biryanis. Chrome can’t shift its mid-life baggage.

The same criticism has been levelled at other popular software packages. Microsoft Office is positively pensionable in software terms, with every version adding more and more features to the code base, like barnacles on the back of a whale.

Hence we arrive in 2020, when Microsoft Word – a program that for 90% of the people 90% of the time does little more than slap words and the odd picture on a page – takes up more than 2GB of storage on my Mac.

Little wonder that a trend for minimalist, lightweight word processors has erupted in recent years. Apps such as iA Writer do almost nothing more than position black words on a white background, yet still command a £30 price tag that people will willingly pay. It’s a 14.8MB download on the Mac. Word is about 200 times its size.

You might argue – and with some justification – that none of this matters very much. Computers get more and more powerful with every generation, generally with more memory and more storage thrown in, so what does it matter if Chrome or Word or Photoshop or whatever uses more resources? There’s plenty to go around.

Well, yes, but the reason we have to keep buying more powerful hardware is because the continued software bloat makes your old computer feel less and less responsive with every passing day. And with software now on the auto-update, subscription treadmill, you have little choice but to take the latest version. It’s not like the good old days where you could stick with Office 95 until you decided to buy Office 97: Microsoft just stuffs the latest version down the pipe and your computer has to deal with it.

Legacy is the problem here. Software grows fatter and fatter because instead of taking the tough decision to start again from scratch, the developers keep adding to what’s already there. Someone at Google and Microsoft needs to take the big decisions (as Microsoft has already done with Edge) to start with a clean slate and build browsers and word processors that do what people need them to do in 2020. Not what they did 10 or 20 years ago.

The big software developers must be braver more often. People get upset by change, it’s true, but when they get the memory and storage back on their computers, that will soon be forgiven.