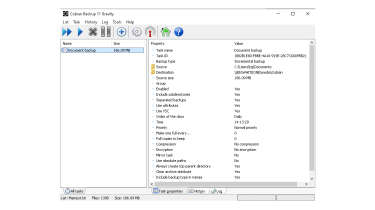 Cobian Backup is a freeware utility unusually aimed at both home and business users. It’s still at version 11 but is kept up to date for modern versions of Windows and actively supported, despite the fact that the rights to create new versions based on the source code were sold in 2014 to someone who promptly abandoned them.

Once you get past this mildly confusing situation, Cobian Backup 11 is a solid and capable free backup tool for Windows desktop systems. It’s a file-level backup tool, so if you require system imaging, you should look elsewhere.

It can run as an application or a service, using a System or regular account, all of which you’re prompted to select at install time; the default settings will be fine for almost everyone, but you’ll have to enter your Windows username and password to have it use your account.

Note that if you want to use Windows 10’s integrated Volume Shadow Copy feature, which allows it to back up system or software locked files, you’ll have to enable .NET 3.5 via the operating system’s "Turn Windows features on or off” settings, ideally before you install the software.

The interface feels a little outdated and some functions could be more clearly named, but it has very useful tooltips and it’s hard to miss the blue plus sign in the ribbon interface, used to create backup jobs. You’ll be prompted to name and configure a few behaviours for the backup, including selecting whether you want a full, differential or incremental backup.

Your backup source can be any combination of individual files, directories, FTP locations or a manually defined path. Similarly, your destination can be a directory, drive, FTP location or path of your choosing. Unlike many rival backup tools, Cobian Backup can browse shares on your network, making it easy to back up data to a NAS or SMB share.

Optionally, you can set a schedule, choose zip or 7zip compression, and enable encryption up to AES-265. You can even execute files and stop services before a backup begins, which can be used to run scripts or ensure the backup utility has access to all the files in its source path. The settings on existing backup jobs can be modified at any time. Detailed logs are kept, and if you point it at an SMTP server, Cobian can email you about backup events and their status.

In the target directory, backup folders are labelled by job name and date, making it easy to browse and find the version of a file that you’re looking for. Unlike most backup tools, however, there’s no dedicated restore function.

This can be annoying if you’re working with differential or incremental backups, as you’ll have a single full back up, and further backups merely copy the directory structure and any files that have been changed since either the full backup or the last backup.

The easiest way to deal with this is to first copy the full backup to wherever you need it, and then the later backups which include any updated files. For this reason, we recommend using differential rather than incremental backups if you have the space for it, as you’ll only need to carry out two directory copies to restore a set of fully up-to-date files.

Overall, Cobian Backup works well and has plenty of features, but its restoration options leave a lot to be desired compared to tools such as EaseUS ToDo and Duplicati.