Any benefits the communications platform saw in Q1 largely disappeared by the summer, according to Morgan Stanley 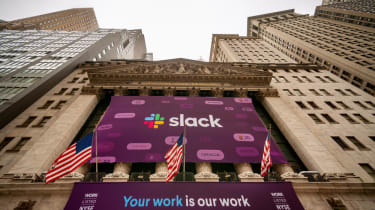 A surge in attention Slack enjoyed at the start of the pandemic, that led to thousands of new paid customers, appears to have now dissipated, according to analysts, as customers appear to now be turning to rival products instead.

The communications platform has been unable to maintain the same levels of growth as that enjoyed by the likes of Microsoft Teams and Zoom, prompting Morgan Stanley analysts to downgrade Slack's stock to the equivalent of a selling rate, according to CNBC.

Slack shares closed down 6.3% after the downgrade. The comms platform hasn't seen the same rapid growth as Zoom, which reportedly saw revenues increase 355% in Q2.

"Massive work from home demand for collaboration tools may end up doing more harm than good for Slack," the analysts wrote, according to CNBC. "We see higher risk at current levels.

"In many cases, Slack did not have the opportunity to properly pitch its differentiation, and in our view, the customers that have standardised on Microsoft Teams are not looking back."

In March, CEO Stewart Butterfield posted a lengthy tweet about the company's reaction to the pandemic and its sudden uptick in paying customers. According to that note, by the mid-point of the first quarter of 2020, Slack had added 7,000 new paying customers, rising to 9,000 a week later. In previous quarters the average was around 5,000 new customers, suggesting that the company would be a beneficiary of the so-called 'new normal'.

Most companies that provide technology or software to aid remote working saw some level of increased adoption in the first quarter of the year and that continued into the second quarter and beyond. Slack, however, saw its growth peak on 3 June, with its stock falling 28% in the following months.

What will hurt more, however, is how far Slack has fallen behind Microsoft Teams. The two companies are fierce rivals but Microsoft's more holistic service helped it secure some 44 million daily active users in March. Those users have largely stayed with the service, according to Morgan Stanley's analysts.

Slack has filed an anti-competition complaint against Microsoft, arguing that Teams is a 'weak' product that is forced upon Office 365 users as part of the bundle.

This complaint has only been raised with the EU and it has yet to be acknowledged.