Scotland will launch its own contact-tracing app 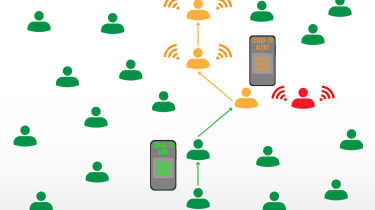 The Scottish government has announced that it is working towards having its coronavirus contact-tracing app available in the autumn.

The app, which is currently “in development”, will complement NHS Scotland’s Test and Protect system and its existing person to person contact-tracing, which was rolled out in late-May.

It will alert users by sending them a unique code to their mobile if they have come in close contact with another user who has tested positive for COVID-19. If they provide their consent, the data will then be sent to a server in order to trace other close contacts who might have also contracted the virus. The app, developed by Nearform, will measure proximity using Bluetooth technology.

According to the Scottish government, the app will be voluntary and anonymised, and will not ask users to reveal personal information at any time.

Scotland’s contact-tracing app is to be based on the same software as the one used in Northern Ireland. This was launched late last week and is also compatible with the Republic of Ireland’s app in order to support movement across the common travel area.

In a statement, the Scottish government said it “remains in discussion with the UK government on its proximity app”.

Scotland’s health secretary Jeane Freeman said that the app “will offer an additional level of protection”.

“Users of the app who test positive will still get a call from a contact tracer to confirm their details and who they have been in close contact with. The app will, however, allow contacts unknown to the positive individual to be traced – for example, fellow passengers on a train or bus,” she said.

“We also know that not everyone uses a mobile phone or will be able to access the app, which is why this software is very much there to complement existing contact tracing methods.”

Commenting on the announcement, Dr Carlos Pinheiro, principal data scientist at SAS, said: “Mobility behaviour analysis can be used to help local authorities accurately define social distancing policies from a regional standpoint, allowing certain areas to be placed in and out of lockdown faster and more precisely, while carefully monitoring higher risk areas.

"A deployment in the Philippines showed that it is possible to predict areas of new outbreaks with high accuracy and to calculate a risk of infection for each geographic region. This tracing method, combined with the contact tracing app, would allow the Scottish Government to maintain a hold on the crucial ‘R’ figure and avoid the possibility of a second nationwide lockdown.”

Last week, executive chair of NHS Test and Trace, Dido Harding, said that an initial version of the UK's app would be released “shortly” and that a demo will be made available to a limited number of people who will provide feedback on its use.

“We will then further develop and roll out the app, based on user experience and testing to create more targeted advice and support for users,” said Harding.