This PDF editor could be a great option, if it wasn't so unreliable 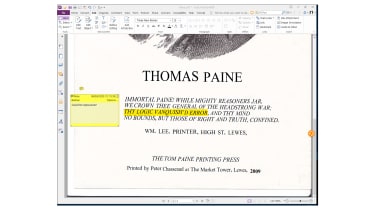 Less, the old cliché tells us, is more. We wouldn’t usually argue that a piece of software should have fewer features, but we’ll make an exception for Foxit: the interface is cluttered, with a migraine-inducing selection of tools behind its 13 tabs. That would be forgiveable, but we suspect this was behind our biggest problem with Foxit: crashing. While PDFelement, Nitro and Sejda often took a few minutes to complete the most strenuous tasks on our test PC, Foxit would often throw up its hands and promptly shut down in protest.

It’s frustrating because what Foxit does well, it does brilliantly. The Edit tab gives you all of the Word-style tweaks, along with extras such as inserting audio or video, re-flowing text and adding an “Article Box” to separate content on a page. The text edit function was responsive, as were the tools for tweaking images – you can clip, crop, shade, boost the opacity and shear to your heart’s content.

The conversion tools are equally thorough. Not only can you transform a PDF into an RTF, TXT, XML, HTML, JPEG, PNG, TIF or BMP file – as well as the Microsoft options – but you can create PDFs from the scanner, a web page, the clipboard or by combining existing files. If you want to start from scratch, there’s also a prominent “Blank” button. The Convert tab is home to a Preflight tool that checks your PDF for issues in the manner of an antivirus scanner, but, you guessed it, this repeatedly caused Foxit to crash for us.

Foxit’s pièce de résistance, though, is its OCR tool. When we threw the troublesome page from a 1981 copy of NME at it, the results, without any exaggeration, were jaw-dropping. As you can see from the screenshot above, Foxit also corrected the angle of a scan of a hand-printed, 18th century-style poster, recoloured it to make it more readable and made the text editable – with no mistakes.

A list of the remaining features would fill another article twice over, but highlights include a tool that reads your PDF aloud, three page-measurement tools, batch printing, PDF optimisation, tracked review emails, OneNote compatibility and Bates numbering.

When Foxit wrote “Everything in Acrobat at a fraction of the price”, it wasn’t joking: it has everything for a £146 one-off payment, compared to Adobe’s £181 annual subscription. Some of the features – such as its OCR – are phenomenal and could be worth the admission price alone, but far too many important tools caused Foxit to crash, leading to a reluctant three stars out of five.