Reportedly used by Torvalds himself, Fedora is a snappy distro that quickly gets your hardware working 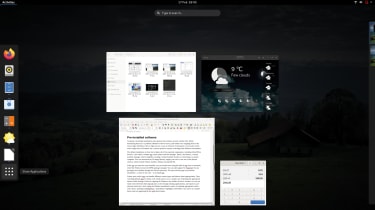 Fedora is the freely distributable offshoot of Red Hat, offering versions for standalone computers, servers, cloud computing, containers and IoT devices. We opted for the first, Workstation release 31, and installed it from a live image. We’d expect this build to be supported until around November this year, by which point Fedora 33 should be ready for download. (Fedora’s typical release cycle lasts six months, with only the two latest releases supported, so each installation is “current” for around 13 months, giving one month’s grace for slow upgraders to get themselves up to date.)

It was extremely easy to install. The live system picked up our Wi-Fi hardware, allowing us to connect to our wireless network pre-installation, and the settings carried through to the version set up on the hard drive. It also handled our laptop’s sleep-wake cycle better than many of its rivals: while most locked off the touchpad when we closed and reopened the lid, Fedora only lost its two-finger scroll function, but still let us drag the pointer with a single digit. The fix was the same as it had been elsewhere: to implement a script that unloaded the touchpad driver on sleep and reinitiated it on wake.

Fedora was in a minority of distros that sported only close buttons on window title bars. While minimising them isn’t a problem (Windows+down arrow), and neither was snapping them to the screen edges (Windows+left or right arrow), the absent minimise and maximise buttons could leave switchers wanting. Fortunately, the fix is a simple one, requiring a single line of code at the command line.

The default installation is slim but has all of the expected components, including LibreOffice, Firefox, a text editor, weather app, music player and file manager. There’s also Boxes, a virtual machine manager, which simplifies creating a VM locally or connecting to a remote computer. You can download an OS image directly to Boxes, supply your own or use one of the default choices, which include Ubuntu, Endless, Debian and openSUSE.

If the app you need isn’t installed, you’ll probably find it in the built-in app store, or you can install it through the terminal using RPM. You can add support for Snap for any packages not in the official repository. 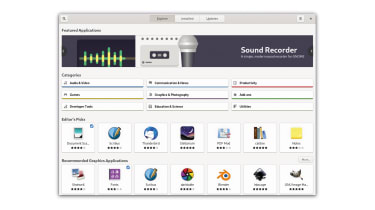 Like the other distributions on test, Fedora spots which apps can handle different content types and indexes them appropriately. Thus, switching default apps for email, web, media and so on is just a case of picking the appropriate option within Settings, as it is in Windows. Alt+Tab cycles through live applications, as it does in Windows.

Tapping the Windows key shrinks all of the active windows to a multitasking view so you can switch between them, while simultaneously exposing a preselected search box. Start typing and Fedora immediately works on isolating results, with “music” pointing to Rhythmbox, “spreadsheet” to LibreOffice Calc and so on, despite the terms not appearing in the application names.

Dormant apps aren’t immediately accessible once you’ve opened the app menu; they’re a further click away behind the Show Applications button. However, once you’ve found them, your most frequently used apps have a tab of their own, which is handy, making them easier to locate. There’s no taskbar in the default desktop, which uses GNOME 3.

It’s easy to connect to your online accounts, with presets for Google, Facebook, Microsoft, Exchange, IMAP and others in the Settings app, which is where you’ll also find controls for notifications, privacy, which apps’ data is included in search results, desktop backgrounds and more.

Fedora spotted our networked scanner and printer, which were ready to use without additional drivers. Clicking the Network tab within the file manager likewise spotted our NAS drive, along with a selection of Macs, PCs and Raspberry Pi devices.

Fedora was snappy throughout our tests. Apps were responsive, remote drives were quick to mount, and in Geekbench 5 it turned in scores of 1,007 and 1,869 for single-core and multicore performance. The latter puts it slightly ahead of Ubuntu.

If you’re having trouble getting your hardware working in other distributions, take a look at Fedora. It was among the simplest to get up and running with, which perhaps explains why it’s said to be the distribution favoured by Linux father figure Linus Torvalds himself.