It’s not quite as fresh as some of its rivals, but Linux Mint will make Windows switchers feel right at home 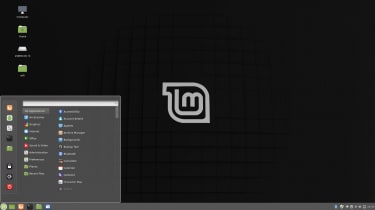 The version of Mint you’ll most likely encounter is based on Ubuntu, but there’s another branch that cuts out the middleman; this uses Debian (on which Ubuntu is based) as its starting point. Either way, Mint doesn’t look much like its parents, thanks to its distinctive desktop language, Cinnamon. It’s getting a lot of favourable attention, with many hailing it as the next “big thing”. The same is true of MX Linux.

We installed version 19.3 Tricia. As with Ubuntu, the process was fuss-free, although our Wi-Fi card wasn’t operative on first booting. This was only fixed once we’d shared a 3G connection from our iPhone and updated the OS. Mint also suffered from an unresponsive touchpad upon wake, as did several others. The fix, as it had been elsewhere, was to implement a script that unloaded the touchpad driver as our laptop went to sleep and invoked it again upon waking. Thankfully though, this is only something you need to do once.

Aside from those two issues, our hardware was well supported. Hot keys for volume, brightness and keyboard backlighting all worked as expected, with appropriate onscreen HUDs and, in the case of the volume controls, audible feedback. External drives mounted when plugged in and could be ejected via the Dock, where an Update Manager icon also advertised available patches.

Mint preinstalled LibreOffice, Firefox and Thunderbird, alongside the Pix image viewer and Rhythmbox music and streaming radio player. Other apps can be installed through the terminal using apt, or the native Software Manager. As in rival distros, this highlights editors’ picks and is easily searched for business essentials such as unofficial clients for Slack and WhatsApp, and useful add-ons such as the Microsoft core fonts package. Don’t assume that just because Mint has Ubuntu overtones, everything that’s available through the Ubuntu software installer is accessible here – or vice versa. Mailspring is a notable omission, although you can install it using Snap. 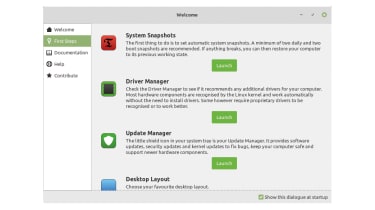 It’s a very easy OS to learn, launching with a welcome pane that walks you through your first steps, including checking that your drivers are up to date, selecting your preferred desktop layout and setting up the firewall and System Snapshots. As the name suggests, Snapshots are system images to which you can return should disaster strike.

Appearances will always be subjective, but we prefer the look of a default Ubuntu installation. Out of the box, Mint is somewhat colder and has smaller interface elements. This can be tweaked, though, and the OS offers a lot of customisation options through its Settings panel. You can go as far as installing new themes entirely – both official and third-party – one of which bills itself Ubuntu Touch.

Windows refugees will quickly find themselves at home. The app launcher is logically categorised and opens on pressing the Windows key, Alt+Tab cycles between open applications and dragging windows to the edges of the screen snaps them to occupy half of the available pixels. You can surface apps directly by typing in the menu, just as with Windows, and find settings in the same manner, even if there’s no direct correlation between what you enter and what you end up with. Typing “default”, for example, calls up the Preferred Applications settings, which is exactly what we were after.

We quickly took to its Desklets concept, which lets you add widgets to the desktop where they live beneath any active windows. Three are preinstalled, providing a floating launcher, digital photo frame and clock, but you can add others to interface with Google Calendar, show the weather and more.

Our only real concern was Mint’s keenness to run our laptop’s fans more than Ubuntu. In our Geekbench 5 test, it scored 1,040 on single-core and 2,099 when running dual core, the latter of which was a considerable improvement on what our Ubuntu install achieved on the same hardware.

Work started on Linux Mint 13 years ago, so it’s not exactly a new kid on the block, whatever the recent flurry of media interest might suggest. It’s also available with MATE or Xfce desktop environments, if you’d prefer not to take the Cinnamon challenge.