The speed, update process and appearance will have you grinning like openSUSE’s chameleon logo 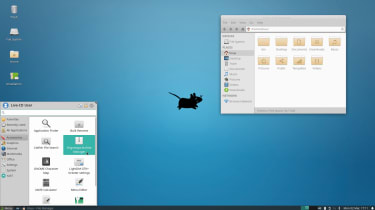 German open source vendor SUSE is well known in the world of IT for SLES, its server-focused Linux distro, but it also offers a desktop OS in the form of openSUSE. Geared towards power users, developers and sysadmins, this software is nonetheless a solid choice for Linux novices as well.

OpenSUSE has one of the best thought-out installers we’ve seen in a Linux distro. There are plenty of manual options for tweaking the defaults, most of which are self-explanatory, and our Wi-Fi was up and running in advance of the install, allowing it to trawl for updates prior to our first full boot.

We were also pleased that the touchpad didn’t clam up entirely after putting the laptop through a sleep/wake cycle, although it did lose its two-finger scroll features until a full reboot. Mouse scroll wheels continued to work fine. The other anomaly was non-functioning sound, both in and out. Plugging in a USB sound source unblocked this in both directions, so the problem was confined to our internal hardware.

openSUSE scored highly for “look and feel”. It has a Windows-style task bar and app menu, the latter of which is categorised. An opening pane shows favourites, after which come applications, computer (head here for settings and places, such as your Documents and Pictures folders), history (which covers both recent applications and files), and “leave” (a neat subsection for shutting down, switching user, hibernating and so on). You can search immediately upon opening the window and the engine underpinning it is intelligent enough to match on function rather than just name, so “music” calls up both the music settings shortcut and your audio folders, while “video” matches VLC Player.

Alt+Tab is beautifully implemented, combining full-screen previews of active apps with a clickable sidebar, allowing you to switch straight to the app you need without having to tab through everything else. 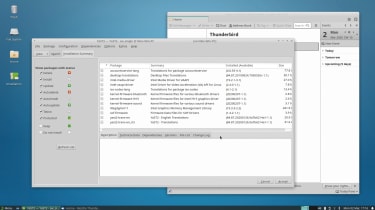 The settings app is one of the best on test, offering fine-grained control over every aspect of the system. Combine it with the YaST Control Center and you’re never more than a couple of clicks from any change you might need to make, including configuring hardware, diagnosing problems and updating drivers. Less impressively, it didn’t detect our NAS device, and neither were our network-attached scanner and printer spotted, either automatically or when we tried to add them through settings.

The software bundle is what you would expect, with LibreOffice handling productivity tasks (openSUSE is the only distribution to install version 6.4 rather than 6.3 by default), a handful of games, Firefox for browsing and Kmail for email. You can install anything that’s missing using the built-in app catalogue.

As with other distros on test, you can also easily change your default apps for specific tasks through Settings. Although you can also set up online accounts, only two are preconfigured: Google and ownCloud.

Package management is handled by YaST, ZYpp and RPM, and you can choose your preferred desktop manager at the point of installation. We opted for KDE Plasma, which appears at the top of the list, but there’s also Gnome and Xfce if you’d prefer either of those.

openSUSE is also available in several different flavours. Ignoring the charged-for retail version (which isn’t available in English), there’s Leap, which ships as a live DVD from which you can install the distro to your hard drive; Factory, which is cutting edge but unstable; and Tumbleweed, which sits somewhere between the two. We opted for Tumbleweed as it delivers the most up-to-date, stable versions of each package and pushes you towards installing it directly on your hard drive. As such, questions about support duration are moot as, effectively, you’ll be upgrading it on a rolling basis, not necessarily in big blocks. In this respect it works much like Windows does with patches rather than how Microsoft’s OS handles periodic feature updates. If you prefer more predictable fixing and patching, new releases of openSUSE Leap ship on an eight-month cycle.

Although it ran our test laptop’s fans a little more often than we might have liked, we found openSUSE to be both fast and responsive in daily use, keeping out of the way and letting us focus on any task at hand. That said, while its single-core Geekbench 5 score was a less than stellar 828, the impressive 1,759 it scored when working across all four cores more than made up for it.