A solid choice for Windows 7 leavers, but we can’t totally ignore the problems we had during setup 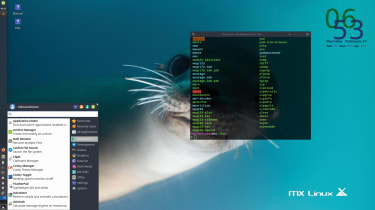 More than most of the other distros on test, MX Linux feels like something that was put together by a loose collection of enthusiasts. It doesn’t have quite the same level of polish as something like Ubuntu or Mint, although this may be a consequence of the fact that it’s designed to be more lightweight than some of the other distros out there.

We had some trouble installing MX Linux, but it was well worth persevering. The main hurdle was that it froze halfway through booting the live USB; only by switching to the text view did we realise that it was waiting for us to log in at the command prompt. We did so, using the default root password, but then it couldn’t start the window server. An online search turned up plenty of advice (it wasn’t an unknown issue), with several forum posts suggesting that we update the kernel.

This is easy enough so long as you have a second PC to hand that can boot from your USB stick. From there, opening MX Tools lets you update the kernel on the live USB, write it back to the stick, then return the stick to your first PC and try booting again. That said, the fix didn’t work for us, so we sourced a recompiled ISO of the live OS, which booted first time using the most recent kernel.

More impressively, the live OS spotted our Wi-Fi, allowing us to get online before we even clicked install and, when we first booted the OS from our hard drive, the password we supplied in live mode was carried through, allowing us to download updates right away.

We were running version 19.1, released in December 2019. The version number before the point relates to the year at the end of which it was released, so expect MX Linux 20 to hit download servers around December this year.

Although our build used the Xfce window manager, it was set up for tap-to-click (unlike Manjaro), and two-fingered scrolling was active, although this – and even touch detection – occasionally broke after a sleep/wake cycle. More seriously, closing our laptop’s lid didn’t put it to sleep in our build’s default configuration – it simply switched off the display. We changed the power settings to hibernate the machine when the lid was closed but this didn’t rectify the issue on our hardware. 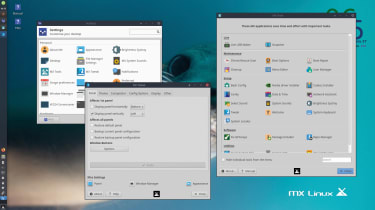 System-wide settings are well organised and split across two apps called Settings Manager and MX Tools. The latter will more often bring you into contact with tweaks that require root access, so splitting them off from run-of-the-mill options is sensible, as it’s likely to cause less confusion among new users.

Windows switchers shouldn’t get lost, even though the taskbar is vertical. You’ll get used to it soon enough, but there is an option to set it to horizontal (pick Desktop from the Panel Preferences). If you want to make more extensive changes, dip into the MX Tweak tool where you can play with themes, display zoom and behaviours.

The application menu is categorised and searchable, and there’s a package manager for installing anything that doesn’t come as standard. The default bundle includes LibreOffice, Firefox and Thunderbird; Clementine and VLC for music and video; and a range of accessories and tools. Our wireless printer and network scanner were both detected, and we had no problems connecting to and browsing our NAS.

There’s a separate updater app lodged in the taskbar, the icon for which switches between an empty wireframe box when you’re fully patched and a solid green box when updates are waiting – it’s a simple and effective touch.

It’s sprightly, too, achieving a single-core score of 1,065 in Geekbench 5, and 2,071 when running the multicore test. We ran the tests a second time to be sure that wasn’t a fluke, and while the single-core result dropped slightly, to 1,054, multicore nudged up two notches to 2,073, making it an excellent choice for any user for whom performance is a must.

MX Linux is attractive and flexible, and there’s every chance you’ll find it works perfectly on your hardware. We found that some of the other options on test were better suited to our particular setup but, as with most Linux builds, you’ll have to make allowances for the fact the operating system and whichever machine you’re installing it on weren’t necessarily designed to work specifically together.