Forget about video calls, the next generation of meetings will be virtual 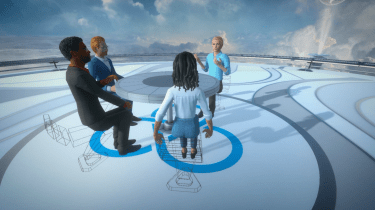 If your working day is anything like mine, chances are you’ve spent most of your time bouncing from one video call to another over the past few weeks; I’ve spent so much time on Zoom that I feel like the interface is burned into my retinas. It’s not a bad way to stay in touch, compared to text-based messaging or standard phone calls, but it still feels oddly forced and impersonal in some ways. While I’m still a proponent of virtual pub trips and hangouts, I’m starting to tire of having endless video meetings.

Recently, however, my eyes have been opened to a better way of keeping in touch over long distances, and it comes from a somewhat unexpected source: virtual reality. Consumer VR has been a thing for a number of years, with Oculus, PlayStation and others trying to capture the attention of gamers with entertainment-focused headsets.

The concept has yet to gain a major foothold among the general public and in recent years VR companies have turned to the business sector in the hopes that it might catch on there. The response from enterprise has been similarly lukewarm, though; outside of areas like prototyping and 3D modelling, there seemed to be few practical applications for the technology, but our new era of social isolation might just have given VR its first killer app.

HTC’s Vive unit has this week taken the wraps off Vive Sync, a business-focused app that is essentially a virtual conferencing tool. Instead of plonking themselves down in front of a webcam to have a meeting, participants don a headset and are transported to a virtual space where they can move around and interact with full-body digital avatars representing their fellow attendees.

I tested out the new app – which is in beta until the end of the year – to talk to David Sapienza. David is the head of Vive’s internal 2 Bears studio and the mastermind behind Sync. Because 2 Bears’ developers are split between San Francisco and Taiwan, collaboration was always a bit of a headache even before the world went into lockdown.

Sync was originally developed as an internal tool to help mitigate this problem, allowing team members to collaborate with a greater sense of presence and personal connection by using an immersive VR environment. In the demo I was shown, this took the form of a serene little open-air platform with a view of the San Francisco bay in the background.

Is it a cheesy gimmick? In some ways, yes, but it’s also surprisingly engaging. Being able to see the body language of the person I was talking to (or at least a rough approximation of it), helped make the conversation feel more natural and genuine, and the ability to move around and switch between sitting and standing was welcome after weeks of having to be glued to my chair.

Beyond that, though, Sync is full of neat little touches that make it genuinely useful. You can spawn tables in a variety of sizes, for example, from small cafe-style tables all the way up to massive boardroom tables, or even amphitheatre seating; a small thing, but one that subtly helps structure and set the tone of a meeting, rather than everyone just floating around aimlessly.

You can also bring up a massive, cineplex-sized virtual screen to display slides, documents and videos within the environment, which conveniently switches to a night-time look for better visibility when you do so. An aesthetically pleasing world clock in the corner even lets participants keep track of what time it is in everyone’s respective corners of the globe, which means meetings are less likely to drag on into the wee hours. 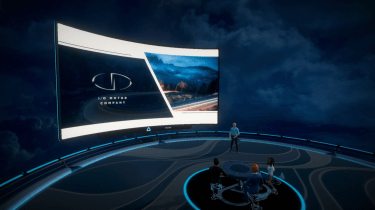 For large, multinational companies who need to conduct in-depth meetings between different geographies, using something like Sync certainly makes more sense than flying a plane-load of executives to one central location. HTC itself is even set to conduct a full annual board meeting next week using the tool.

It’s got problems, of course, namely ones of accessibility. The beta version of Vive Sync is currently free, but you’ll have to pay for the service at some point, and you’ll have to drop several hundred pounds on a headset for every employee that needs to access it. With that being said, I used a standalone Vive Focus Plus headset to dial in, and the setup process was mercifully short and simple. The company is also planning to open it up to more platforms in the future, including potentially other VR headset models and ever letting people dial in on a normal PC.

There are stumbling blocks, and the technology isn’t likely to replace the trusty video call any time soon – but sticking a VR helmet on and having the next best thing to a real-life face-to-face conversation felt closer to the future promised by utopian science fiction than anything I’ve experienced to date. It’s not quite the holodeck – but I can see it from here.