Google Hangouts review: The pros and cons of simplicity

From its ease-of-use to its lack of functionality, Hangouts is a basic, but safe, videoconferencing tool

Since the world has gone into lockdown and we've all had to connect with friends, family and colleagues via videoconferencing, three services have come to the fore: Microsoft Teams, Zoom and Google Hangouts.

Hangouts is a natural choice for most, as it comes free with a Gmail account and is almost foolproof, which is why it has proved so popular for both businesses and consumers. It also hasn't been plagued by security issues like Zoom, which has seen a significant backlash in recent months. But with these services gaining importance, is Hangouts right for you?

Google's collaborations tools can be a little confusing, especially as it has Hangouts and Meet, which are two separate services that almost do the same thing. The way to differentiate them is that Meets is the version that comes bundled in with paid G Suite plans, while Hangouts is available to free users. Meets boasts a few more enterprise-friendly features than Hangouts, including support for meeting-room infrastructure and meeting recording - so you can either have a free, but limited, version of the software or you can opt for a business account and have the version with more functionality.

Basic G Suite accounts including Meet start from £4.14 per month with a rudimentary suite of features such as a limit of 100 participants on calls and 30GB of Drive cloud storage. A 'Business' option which costs £8.28 per month increases the participation limit to 150 and adds unlimited Drive storage. The final tier is a £20 enterprise champion that allows for up to 250 participants on calls, unlimited storage and, quite crucially, significantly greater security options.

G Suite had already seen quite significant growth before the coronavirus pandemic forced us all into lockdown, but services like Hangouts have been a key tool for many individuals and businesses since the outbreak. One reason for this is that it's ever so simple to use via either the app or the web version.

The interface, launched from a web browser, has giant buttons for call, video and chats right there in the middle so you can jump into any of the three straight away. To the left of that is the instant messenger feature which is again easy-peasy. There are also icons to open the menu and contacts pages in the top left corner, although a couple are somewhat redundant. 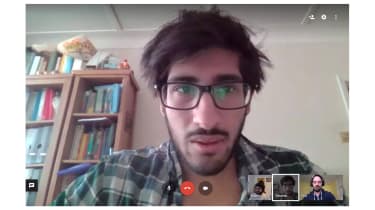 Such is the ease of its interface, the least tech-savvy person in your office - or even your nan - will have no trouble navigating it. This isn't something to be totally thankful for though, as the main reason it's so simple is because there isn't a whole lot of things to do on it. Compared to features offered by other services like Zoom or Teams, such as customisable backgrounds and collaborative whiteboards,  Hangouts is relatively basic no matter which tier you pay for.

Call quality on Hangouts is decent enough; its basic function works, in that you can see and hear the other callers, but it could be better. Competitors like Zoom and Microsoft Teams are doing it better with clearer calls. Obviously, any participants on your call with poor Wi-Fi will cause a bit of fuzziness, but it's an almost constant problem with Hangouts, regardless of broadband, where other callers are blurred behind extreme pixelation or their voice is subject to a slight delay. Inevitably, this results in people talking over each other, which can be frustrating and awkward during meetings.

Integrating with other apps is arguably where Hangouts and G Suite is at its best. As the videoconferencing service within Google's suite of apps, it's one click away from Google Docs or Drive and can even be launched from Gmail. Setting up meetings from your shared work calendar is utterly foolproof.

It's arguably helped other comms platforms too, such as Slack, which integrates with G Suite seamlessly. Just typing '/Hangouts' within a channel or private message is all you need to launch a call.

Security is a big concern with videoconferencing platforms right now - particularly Zoom - but Hangouts has a bit of an advantage in this area as it comes bundled in with G Suite. For example, anyone that doesn't have access to the shared calendar will have to be verified before they join a call. There are also preventative functions to stop unwanted participants from hijacking your call. All of these elements are set as default, so most users will hardly notice them.

As for other features, Hangouts has very little to offer. It is, after all, a free service and you are literally getting what you pay for: basic video calling, instant messaging and the ability to share your screen with other participants. This is probably a big factor in Google making Meet available for free until September.

While the pandemic continues, so will the increased use of videoconferencing platforms. And, given the length of the lockdown, it's worth investing in a service. Hangouts is free but it's very limited. So choosing something paid for might be a better option. Currently, services like Zoom are free, so it may be worth trialling a few before a final decision is made.

Meet being available for free until September does change things and it probably is worth choosing that over Hangouts while in lockdown. But, if you want a bog-standard service without the fuss, the latter is for you. Sure, you'll have less functionality, like not being able to change your background into something funny, but this is the new normal for most businesses, and your boss probably isn't going to care whether or not you can make it look like you're calling from space.