The Norwegian firm has just debuted on the stock market, using its own service 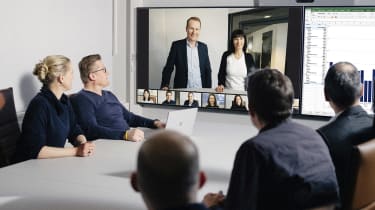 “We've been in this for a few years now, but it's taken a pandemic to actually kick it off.”

Giles Chamberlain, CTO of startup Pexip, is musing on one of the less expected outcomes of the coronavirus pandemic: the explosion in the use of video conferencing services.

He’s right, of course. The technology, which some had even started to consider old-fashioned, has really come of age during the outbreak of COVID-19 and subsequent lockdowns, keeping tech-savvy businesses ticking over and revolutionising the humble pub quiz.

Technology firms becoming successful businesses in a time of economic and political crisis isn’t anything new. Amazon grew out of the dot-com bubble, Uber and Spotify emerged from the wreckage of the Great Recession, and there is a feeling that something based on video conferencing will rise out of the coronavirus. The early front runner seemed to be Zoom, but security concerns have seen its reputation – and clientele – plummet.

“A lot of the things that Zoom has experienced have been a little bit unfair,” he says. “If you post your meeting link on social media, you’re going to have people all over the place, right?”

Indeed, this was a common cause of the “Zoombombing” issue that dealt one of the first blows to its reputation and a slip up made by the UK’s prime minister, Boris Johnson.

Despite the empathy, however, Pexip is firmly one of Zoom’s rivals. The Norwegian firm also saw a huge surge in users when the coronavirus hit Europe, but so far, there have been no public security gaffs.

The Oslo-based startup has been a big favourite for a number of organisations around the world, thanks to its comprehensive security, but also its flexibility. The Irish Court system has been using it during the lockdown, hosting hearings virtually where attendees can link up via other video conferencing services, according to Ireland's national broadcaster, RTÉ.

“It is technically possible,” Chamberlain ponders. “You can call out from this meeting room we're in at the moment into a Zoom meeting, or into a Microsoft Teams one. We just had one interesting experience of joining a Google meeting to a Microsoft meeting – pure Ghostbusters fashion, crossing the streams.

“We’re the only company that provides Google Meet interop, we're one of three certified companies providing Microsoft Teams interop and then we specialise in the standards-based interop from people like Cisco and Huawei.”

Pexip is made up of a team of video conferencing veterans. It’s their work and their obsession, so much so that the firm recently debuted on the stock market via its own service. What better way to market your product to investors than to use it for an IPO? To say it worked is an understatement as Pexip is now valued at $942 million - not far off unicorn status.

The IT Pro Podcast: Do we still need offices?

Pexip’s team has over 20-years of experience in video conferencing. Chamberlain and Lia had actually been working together long before their company was even an idea. The two met when a video conferencing firm from Oslo, called Tandberg, acquired a UK rival called Ridgeway. “I thought the company had been taken over by a bunch of crazy Norwegians,” Chamberlain quips.

Tandberg was acquired by Cisco in 2010 and a couple of years later Lia and Chamberlain parted ways, each leaving to found their own video conferencing startups. Lia formed Videxio, which focused on the software as a service (SaaS) side of things, whereas Chamberlain’s company was called Pexip and specialised in video infrastructure. Both firms became relatively successful in the following years and in 2019 they merged, bringing Lia and Chamberlain back together again.

Having the two specialities in one service gives Pexip a unique advantage. Customers can either use it as a traditional video conferencing service or similar to the Irish Courts, they can self-host Pexip’s infrastructure and take on responsibility for security themselves. Both use cases have attracted the likes of Vodafone, Intel, Amnesty International, and many more.

“We've been going after the large enterprises from day one, that was always the target,” Chamberlain explains. “We sell to the US military and the US Federal [Government]. That means we've been through something called Joint Interoperability Test Command (JITC) certification, which is a very elaborate certification process saying this stuff is fit for purpose.

“The distributed software, it's incredibly hard to bolt on retrospectively. So building that in from the start, it makes it slower to develop the product, but it does mean you have a more secure system. We do have customers who deploy our stuff on networks that aren't connected to the internet. That's secure. You're gonna have a real job hacking that one.”

So far, security is the main battleground in the race to be the top video conferencing company. Where Zoom has struggled, Pexip has flourished, as have other services, such as BlueJeans. But, will there be as much interest once the world opens up again?

“I think there's a social change that will happen,” Lia explains. “Of course, not everybody likes to work from home. We have to respect that as well, but at the same time, I think a lot of enterprises didn't prepare their workers to work from home. They didn't have a policy to allow that flexibility and now they've been forced to. So I think that will never be the same again.”