We’ve all been on calls trying to get a word in, but virtual meetings are about to get more crowded… 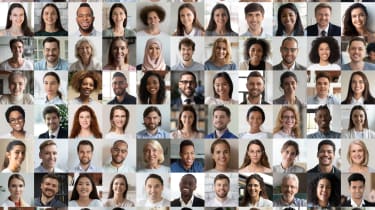 I don’t think I’m alone in letting out a large sigh when I saw the news about Microsoft Teams this week.

Microsoft Teams now supports 20,000 people meetings. That’s 20,000 people. Imagine trying to get your point across and voice heard over 19,999 other people on a video conference call?

That said, according to Microsoft, once your virtual meet hits the 1,000-attendee number, it becomes view-only - meaning only certain people are allowed to unmute themselves. But 999 people is still a pretty crowded meeting.

Yes, as if it wasn’t hard enough – in between wrestling with fickle Wi-Fi and trying to listen intently to proceedings as your neighbours start their umpteenth DIY project in the background, the bins get collected and another neighbour has their 40th Amazon delivery of the day – to get your point across without speaking over people or coming across as rude, virtual meeting life is about to get more difficult.

Some meetings are so crowded already now that it feels like being on the tube; it’s been a while, but I can still remember that sardine-like feeling. To the credit of my colleagues, we seem to have largely established an unwritten rule in that everyone else mutes themselves and unmutes when they want to speak – it’s like having the talking stick/speaker’s staff.

It can be a hard balance to strike, though. In a physical meeting, you can generally gauge how people are feeling not by what they say, but by what they don’t say. Body language is a real indicator if someone is unhappy, but also if they’re about to speak or want to say something. It’s really hard to get that sense from miles away when you can only see someone in a tiny window.

Don’t get me wrong, I’m a big fan of virtual meetings. They’re better than a phone call and the next best thing to being in the same room as people. However, I do tend to agree with Dale Walker’s point back in June about getting conference call fatigue.

Back in the physical office (anyone remember that?!), most of my working week was a sea of meetings, running from conference rooms back to my desk to pick up a snack or respond to a message before running away again to another meeting. And so on and so forth, ad infinitum.

Being able to switch that meeting workload to the virtual world has made life much easier for me. I’m not running around between meeting rooms any more for a start. Those meetings also – particularly the two-person or small group ones – tend to be much more efficient and productive, too.

But in some respects, it’s also made life harder, not least because you’re spending a whole lot more time staring at a screen; and while you can simply turn off the video to give your eyes a rest, that's not always realistic - I'm sure we’ve all felt that judgement around using audio-only, even if, in reality it’s just ourselves that are being judgemental. This effect is particularly pronounced when you have the virtual meeting equivalent of a school coach trip.

After my initial shock at the idea of any more people joining my next meeting, I calmed down and thought about who would use the 20,000-person feature in reality, rather than just in theory.

I can definitely see a good use case for mass gatherings like company conferences and virtual events, whether that is something corporate or something slightly more fun such as a music or theatre event.

And, maybe, just maybe, if I get to attend something like that, I’ll start to fall back in love with virtual meetings all over again…