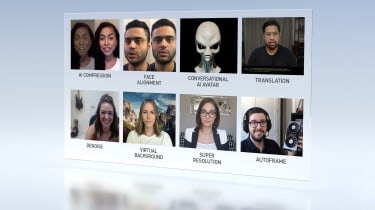 Nvidia has launched a GPU-based video conferencing platform for developers that it claims can fix common issues with video calling.

The service is called Nvidia Maxine, a cloud-based platform that will use AI to realign callers' faces, improve streaming quality, boost resolution, and more.

Video conferencing is the number one source of internet traffic, according to Nvidia, with some 30 million web meetings estimated to take place every day. With that in mind, the company has developed a cloud-based suite of 'GPU-accelerated' AI enhancements.

With Maxine, service providers running the platform in the cloud can offer users new AI effects, such as 'gaze correction', super-resolution, noise cancellation and face relighting. What's more, because the data is processed in the cloud rather than on local devices, Nvidia suggests that end users can enjoy the new features without any specialised hardware.

"Video conferencing is now a part of everyday life, helping millions of people work, learn and play, and even see the doctor," said Ian Buck, vice president and general manager of Accelerated Computing at Nvidia.

"Nvidia Maxine integrates our most advanced video, audio and conversational AI capabilities to bring breakthrough efficiency and new capabilities to the platforms that are keeping us all connected."

Maxine also includes reduced bandwidth whereby the AI software is used to analyse key facial points of each caller and re-animates the face in the video. This takes away the need to stream every single pixel which in turn requires less data to go back and forth across the internet.

The face alignment feature automatically adjusts users so they appear to be facing each other during a call and gaze correction helps simulate eye contact, even if the camera isn't aligned with the user's screen. Nvidia claims these features will help people stay engaged in the conversation rather than looking at their camera.

Democratising AI for all: Transforming your operating model to support AI adoption

How to make the most of AI capabilities

Developers can also add features that allow call participants to choose their own animated avatars with realistic animation automatically driven by their voice and emotional tone, while an auto frame option allows the video feed to follow the speaker even if they move away from the screen.