Designed with Apple in mind, but worthy of consideration for Windows users too 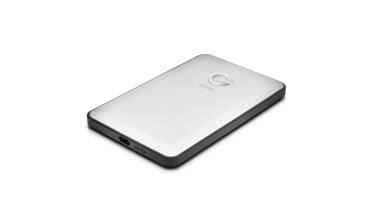 G Technology is somewhat unusual in the storage sector, aiming as it does primarily at the Apple market, and as such being one of the few drive brands that supplies products formatted for macOS out of the box. A lesser-known part of the Western Digital empire, it keeps away from the WD/Sandisk/HGST melee, much as LaCie does from Seagate.

The Slim SSD USB-C is, however, fully capable of working with Windows, and so for continuity purposes, we've reformatted it for our test machine.

The advent of USB-C is somewhat muddying the waters, as the standard is also capable of carrying Thunderbolt 3, but in the case of this model, the interface is a 'full' USB-C generation 2 cable supplying USB 3.1 at 10Gbits/s.

Design is fairly typical of the current crop, with a sandblasted silver top and a black base. Build quality is incredible. In fact, we have a bit of confession - we managed to crush our review model. It has a dent and a bend of around 15 degrees straight through it, but the case is intact, and the drive still works perfectly. So we can attest that this is one rugged device.

Unlike many other brands, G-Technology doesn't make a big song and dance about accompanying software. There is a G-Technology Assistant for both Windows and Mac, but it's far from necessary for USB connections (it's more for NAS applications), and almost hidden away. There is a Format Wizard for converting the drive to Windows, but again, you can do that from the Windows menu anyway.

So given the lack of 'added value', you would hope that there is a very solid product at the heart. And thankfully, you'd be right.

The sequential read speed is one of the best we've seen recently, clocking in at 544.1MB/sec on our test machine, which is actually higher than the 540MB/sec claimed. Sequential Write is much slower at 100.3MB/sec.

It does seem that this device reads a lot better than it writes. The Q8T8 for random read clocks 140.3Mbits/sec, but writing is just 7.681Mbits/sec.

The Q1T1 which shows a single processor core on a single task, shows 21.72Mbits/sec read and 6.389Mbits/sec write speeds. This suggests that more compute doesn't have a dramatic effect on write speeds (though it does impact read significantly).

What this tells us is that the drive is exceptional for multimedia storage. Loading it up with RAW photo and 4K video will be slow, but recalling it for displaying or streaming will be exceptionally fast.

Given that the drive was made with graphic-heavy Apple in mind, that's something of a relief, but with an increasing number of Windows-powered rivals like the Surface Book, this has an important place in PCs too. If you need lots of upload when on the go, there are better drives out there, but in terms of read speeds, then this surpasses all our expectations in a tiny little case.

A superb ‘load it and go’ for multimedia files, this is one of the fastest SSD devices we’ve seen. Though aimed at the Apple market, the increasing graphic credentials of Windows means it does a sterling job for both but beware, upload is slow