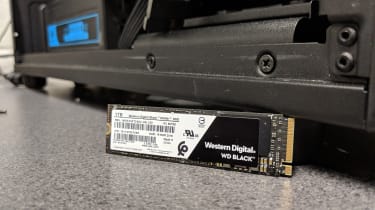 The original WD Black, released last year, was a pretty underwhelming M.2 SSD: with sequential read and write speeds up to 2,050MB/sec and 800MB/sec respectively, it was easily outpaced by Samsung's blistering 960 Pro and 960 Evo.

This 2018 update is a different story. For one thing, it's Western Digital's first 3D NAND SSD, and it doesn't just use the most common Triple Level Cell (TLC) variety - it also includes Single Level Cell (SLC) blocks, which is a more expensive technology but can generally read and write faster than TLC.

This combination works somewhat like a smartphone processor where some cores are faster than others. When you hit the WD Black with a heavy load of data to shift, it will attempt to process as much as it can with the quicker SLC blocks; the rest is handed over to the TLC memory. It's an interesting system that allows the WD Black to leverage a typically enterprise-grade flash technology inside a consumer SSD. 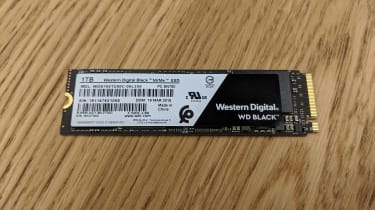 To be sure, this is a premium SSD by mainstream standards. Still, none of these capacities are significantly more expensive than their 960 Evo and 960 Pro equivalents, and are actually slightly cheaper than the newer Samsung 970 Evo models as well. It's also worth noting that the 1TB 970 Pro, another new release, will set you back 54.6p per GB - so while the WD Black is pricey, it's far from the worst offender.

Maximum claimed speeds vary between capacities, from 3,000MB/sec read and 1,600MB/sec write on the 250GB model to 3,400MB/sec read and 2,800MB/sec write on our 1TB unit. The good news is that CrystalDiskMark proved these to be accurate, even conservative, by recording a sequential read speed of 3845.6MB/s and a sequential write speed of 2,850.3MB/sec. We haven't tested the 970 Evo, but since that SSD's claimed speeds only go up to 3,500MB/sec read and 2,500MB/s write, that looks like a win for the WD Black. Its AS SSD results impressed too, namely 2753.48MB/sec in the sequential read test and 2401.99MB/sec in the sequential write test.

However, in our own file transfer tests, the WD Blue faltered. NVMe SSDs often exceed 1,700MB/sec read in the huge file test, but here it only managed to average 1024.41MB/sec, and its write speed result of 1132.42MB/sec wasn't great either.

Speeds dropped further in the large files test, with the WD Black scoring 977.16MB/sec read and 1035.96MB/sec write, and it struggled to even beat SATA speeds in the small files test, only averaging 361.54MB/sec read and 383.23MB/sec. Again, we don't yet know how the 970 Evo will perform in the same benchmarks, but even the two-year-old 960 Evo did far, far better in all three tests.

We're satisfied that the WD Black can reach its advertised speeds; at its absolute best, that SLC/TLC double act puts it among the fastest M.2 drives ever. 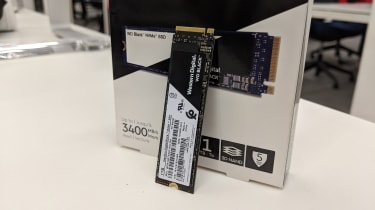 At the same time, it appears to have trouble maintaining this level of performance, especially when faced with having to move multiple files at once. For that reason alone, Samsung's SSDs still reign supreme - though it is encouraging to see them finally get some real competition.

With a dash of the best-performing 3D NAND available, the WD Black is a massive improvement on the company’s previous M.2 SSD – but it’s still not the best for working with masses of files at once