Kingston UV500 M.2 review: Security at the cost of speed

On this slim M.2 drive, full-disk encryption is the consolation prize for underwhelming performance 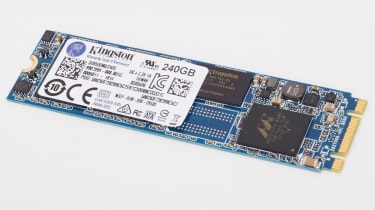 Few names in the tech world cover as many different products as 'UV500': it's the umbrella brand for a full series of 2.5in, M.2 and mSATA SSDs, each offering different storage capacities at slightly different prices (fortunately, usually only by one or two pounds).

It may feel as though you're not making the most of an M.2 slot if you're only using a SATA-based SSD instead of a lightning-quick NVMe model, but then the UV500 is priced accordingly - which is to say, less than a 240GB NVMe drive would be. This M.2 form factor could therefore be a good choice if you're upgrading a laptop or have a PC case without any spare 2.5in bays.

Besides, speeds aren't even the UV500's headline feature. That would be the 256-bit AES full-disk encryption, which automatically adds a thick layer of protection to every byte of data you save on it. As a matter of fact, this is Kingston's first attempt at shipping 3D NAND SSDs with full-disk encryption, having dabbled in both but never combined the two in a single product.

The UV500 also meets the TCG Opal 2.0 specification, which basically means it deploys a few extra tools to keep things secure, such as pre-boot authentication and on-disk decryption (which keeps the decryption process separate from the host machine, where it's easier to compromise).

Even if all this seems unnecessary to the kind of user whose most valuable saved data consists of some family photos, we can see the appeal. Encrypting your drives usually involves either faffing around with third-party software or relying on something like BitLocker, which is only included in the more expensive Pro version of Windows. With the UV500, you simply install it as you would any other SSD, and its complete encryption is automatically ready to go.

There's a catch, however: while full-disk encryption doesn't affect performance by any noticeable degree, at least on modern PC hardware, this is not a reliably fast SSD. 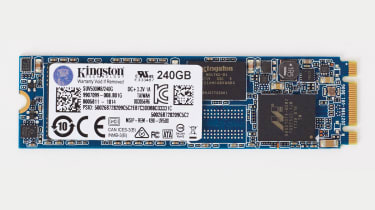 By that we mean it is capable of high speeds, but it seriously struggles to keep them up. Nothing shows this better than our CrystalDiskMark results: we initially recorded a great sequential read speed of 537MB/sec, as well as a sequential write speed of 507MB/sec, both slightly above Kingston's own advertised speeds. Once we'd finished the more punishing 4K test, however, the UV500 had collapsed to a 235.8MB/sec sequential read and merely a 195MB/sec sequential write speed. That's even slower than the old UV400, which was more of a conventional, unencrypted SSD.

Things weren't much better in our Disk Bench file transfer tests. In the huge file test, the UV500 averaged a decent read speed of 408.22MB/sec but just a 247.52MB/sec write speed, one of the worst on record. The large files test, which is moderately harsher, dropped things down to an average read speed of 370.06MB/sec and an average write speed of 226.19MB/sec.

The small file test exacted by far the biggest toll, with read speeds plummeting down to 230.18MB/sec and write speeds staying low at 219.92MB/sec. In fairness, even the mighty Samsung 860 Evo only came out of this particular test with a read speed of 273.91MB/sec, but it write speed was over twice as fast. It should be deeply worrying to anyone more concerned with everyday performance than high-grade encryption that the UV500 slows down by more than half when subjected to heavy loads.

Endurance is a much more positive story: this 240GB UV500 is rated at 100TBW, so most users should get years and years of service before it naturally starts to degrade. That's less than the 250GB 860 Evo, which is rated at 150TBW, but still pretty good. The 120GB version only scores 60TBW, but the 480GB model jumps up to an impressive 200TBW.

Of course, given that Samsung's SSD is both cheaper and quicker, it simply makes a much better option for users who don't need layers upon layers of security -- and we note that it, too, has an M.2 version. That leaves the UV500's encryption as pretty much the sole reason to choose it. For anyone truly worried about the security of their files, the unfavourable performance could be an acceptable trade-off. Everyone else can look elsewhere.

Given that other drives are speedier and less expensive, the Kingston UV500's encryption is pretty much the sole reason to choose it. For anyone truly worried about the security of their files, the unfavourable performance could be an acceptable trade-off. Everyone else can look elsewhere.