Seagate Barracuda 500GB SSD review: A fish out of water

Can this dominant hard disk brand transfer its success to SSDs? 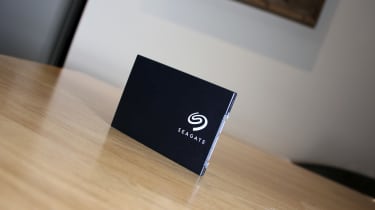 The Seagate Barracuda name will be familiar to people who keep an eye on storage, but we're used to seeing the brand attached to slow, capacious hard disks.

Now, though, the familiar name and logo has appeared on a new range of SSDs. That's no surprise, with improving SSD capacities and decreasing prices causing ructions in the hard disk market. But are these new drives any good?

There are no surprises when it comes to the Barracuda's specification. These drives are powered by a quad-core Phison S10 controller that's been around since 2014. The memory is made by Toshiba, and is 64-layer 3D TLC NAND. That type of memory is the most common configuration in SATA-based SSDs these days, and that's about as many layers as you're going to get right now. It's a system that tries to balance efficiency, reliability and performance rather than going all-out for speed.

That makes sense in a drive like the Barracuda, which needs reliability rather than speed. And breaking records is a moot point, anyway, because it uses the SATA 3 interface - so read and write speeds are capped at around 600MB/sec. That's far faster than any hard disk, but several times slower than pricier PCI-based NVMe drives. The rest of the specification isn't particularly ambitious either. You get DDR3 memory rather than faster DDR4, for instance. There's TRIM and S.M.A.R.T support, but no low-density error correction and no AES 256-bit encryption. 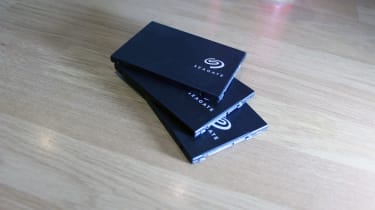 Those four capacities have different endurance ratings based around how much file writing each SSD can withstand. The 250GB and 500GB drives are rated for 120TB and 249TB of file writes. The 1TB and 2TB models serve up 485TB and 1,067TB of file writing potential. For the vast majority of users those endurance levels will be fine - you'll never get near them unless you're writing hundreds of gigabytes to the drive every single day for five years.

There's nothing inherently wrong with the Barracuda's familiar specification and modest pricing, but Seagate's drives face strong competition. The Samsung 860 EVO has the same sort of NAND as the Seagate, but it has AES 256-bit encryption - and is available with a 4TB model. Samsung's prices trade blows with Seagate. The 250GB Samsung is 40 exc VAT, but the 500GB model is 58 - just like the Seagate. For the 1TB and 2TB drives, expect to pay 123 and 266.

The Crucial MX500 is available in the same capacities as the Seagate. It's got encryption, but it has poorer endurance ratings than the Barracudas. It's a little more expensive than the Seagate, with its four capacities costing 58, 63, 132 and 275 respectively.

On the outside, the Barracuda uses the conventional 7mm form factor, so it'll fit into any laptop or dekstop with a 2.5in drive bay. It's also got a five-year warranty, which matches both its rivals.

There are no surprises when it comes to the Barracuda's benchmarks. Its CrystalDiskMark sequential read and write speeds of 563MB/sec and 536MB/sec are fine - quicker than a hard disk, but virtually identical to the Samsung 860 EVO. The Seagate's read score is level with the Crucial, and its write score is better - but only just. 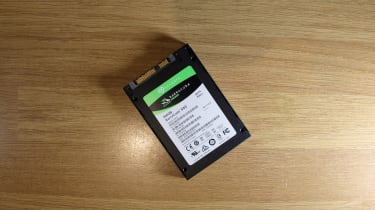 A dive into further CrystalDiskMark testing highlights the Barracuda's strengths and weaknesses. Its 4KiB Q8T8 write speed of 368MB/sec is marginally better than the Samsung, but its read speed of 382MB/sec is nearly 30MB/s slower. It outpaced the 860 EVO when handling files in single threads, but fell behind in multi-threaded and more complex workloads. It was, at least, better than the Crucial in most of these tests.

When a big portion of an SSD's workload is handling multi-threaded situations and small files, that's an issue - and it means that the Seagate won't be as responsive as the Samsung drive.

The Seagate Barrucada SSD is one of many drives that offer far better performance than hard disks - without costing much more at the checkout. 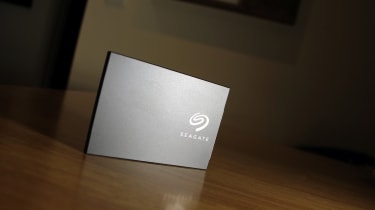 And, while the Barracuda does deliver that extra speed, it's an unambitious product that doesn't earn a wholehearted recommendation. While it matches the Samsung drive in sequential read and write tests, the aging controller and standard NAND configuration can't cope with trickier tasks. Its lesser speeds in more complex workloads indicate that the Barracuda won't be as responsive when it comes to getting work done.

The Barracuda is not slow, though, and would be worth buying if it were a little cheaper, but the Samsung 860 EVO offers more consistent performance for the same sort of price - so that's the SSD we'd buy instead.

Reasonable SATA speeds, but it struggles with trickier workloads and could be a little cheaper