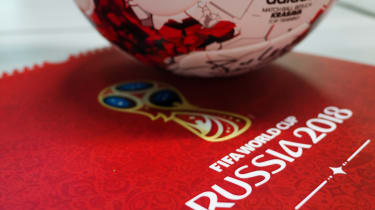 Believed to be part wider spyware campaign targeting members of the Israeli Defence Force (IDF) dating back to the start of 2018, ClearSky security researchers have discovered a variant aimed at targeting football supporters manifesting as an application named 'Golden Cup'.

Researchers at Symantec noted that given the original approach was "not a great success", the hacker's latest attempt involved a hurriedly created malicious World Cup app to offer users live scores and fixtures and distribute it to Israeli citizens as well as military personnel.

"We assume it was rushed because, unlike GlanceLove, it lacked any real obfuscation," its researchers Roy Iarchy and Eyal Rynkowski wrote on the cyber security company's official blog.

"Even the C&C [command-and-control] server side was mostly exposed with the file listing available for everyone to traverse through it. It contained approximately 8GB of stolen data."

GoldenCup is a fairly innocent-looking app in that its code is aimed at executing the app's touted functionality as a scores hub, while also being geared towards collecting identifiers and some data from the host device.

Thorugh the use of a phased approach GoldenCup exploits its fairly innocuous design to get past Google's security processes and get listed on the Google Play Store.

After receiving a command from the C&C - communicating using a Message Queuing Telemetry Transport (MQTT) protocol - the app downloads a malicious .dex file that adds additional malicious capabilities. Using this delivery method, its developers can submit a seemingly-legitimate application to the Play Store, adding any malicious elements thereafter.

The first phase involves collecting device information, as well as a list of apps already installed on the device, before the app processes an "install app" command that downloads an encrypted zip file containing a second .dex file.

From this point, the spyware's functions span from collecting more information about the devices to recording phone calls. The attackers can track location, upload images and video files, upload contacts information, upload SMS message history, record audio using the microphone, and use the camera to capture bursts of snapshots.

These can either be run periodically or upon receiving a command from the C&C server.

"We were unable to find technical similarities or infrastructure overlap with a known threat actor," Clear Sky's research team said.

"However, we assess with medium certainty that the threat actor behind this campaign is Arid Viper based on the targeting of Israeli soldiers, type and character of fake personas on Facebook, and previous Arid Viper activity."

The emergence of a World Cup-related cyber threat is in keeping with malicious actors' tendencies to exploit contemporary or widely-talked about events in the public domain.

Researchers at Kaspersky, for instance, detected a rise in phishing attacks tied to the World Cup in the weeks leading up to the event, alongside a general rise in the number of football-related spam - detailing a series of observations including fake lottery win notifications, and emails from attackers impersonating tournament sponsors.