The PM1633a's storage space is equivalent to 300 Blu-ray discs 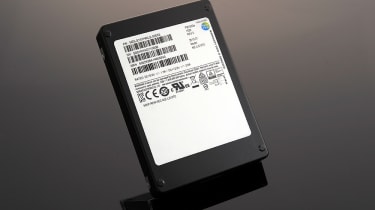 Samsung has introduced a 15TB solid-state drive (SSD), which it claims is the largest drive of its kind in the world today.

Its 15.36TB of space is equivalent to approximately 300 Blu-ray discs or 4,000 standard layer DVDs, while Samsung said its 2.5-inch form factor means enterprise storage managers can fit twice as many of the drives in a standard 19-inch, 2U rack, compared to an equivalent 3.5-inch storage drive.

The South Korean manufacturer had first unveiled the PM1633a at the Flash Memory Summit in August 2015, saying that the drive is a product of Samsung's 3D V-NAND chip technology, and therefore should be more reliable than its predecessors.

Samsung has not yet unveiled the price or release date of the new drive, which will go on sale alongside smaller storage drives later this year, including 7.68TB, 3.84TB, 1.92TB, 960GB and a 480GB drive.