A speedy and reliable NVMe drive 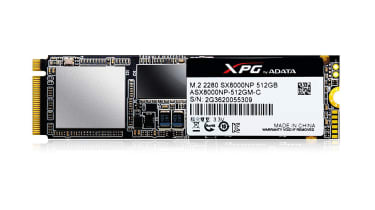 The XPG SX8000 is Adata's top-of-the-range M.2 SSD, and it exploits the NVMe interface to deliver speeds far in excess of anything attainable over a SATA connector. It's still far from the fastest drive we've tested however: rival drives can be up to 70% faster when it comes to sequential reads, and around 80% faster at sequential writes. Even some mid-range competitors comfortably outpaced the XPG in our tests.

Still, in real-world usage the XPG SX8000 feels perfectly snappy. That may be partly down to its hybrid buffer, which uses DRAM for short-term caching but can also address MLC cells in simulated SLC mode for faster access. With such trickery under its hood, the XPG SX8000 bested most other drives we've tested in the multi-threaded read test.

The drive also impressed us in PCMark 8's storage tests: these exercises aren't always very revealing, as they (accurately) reflect the fact that drive speed has a limited impact on real-world application performance. Even so, it's notable that the XPG SX8000 came near the top of the list. It completed the 'Heavy Photoshop' benchmark in 353 seconds.

There's no need for spacers or brackets with an M.2 drive, so you don't get any goodies in the box aside from the unit itself. There's no hardware encryption on offer either, but - as with Adata's other drives - your purchase does entitle you to download Acronis True Image HD 2015, to help move an existing system onto your new drive.

The XPG SX8000's strong suit is stamina. The 512GB capacity model is rated for 320TBW, with a mean time to failure of two million hours; in both cases that's better than rivals like the Samsung 960 Evo, which promises 200TBW and a lifetime of 1.5 million hours. The drive also comes with a five-year warranty, versus the Evo's three - although of course this only covers the physical disk, not the data on it.

Overall, we're inclined to prefer the Evo - for just 15 more it delivers significantly better sequential performance, not to mention built-in encryption. But the Adata XPG SX8000 is a solid drive that's well worth considering, especially if you're looking for heavy-duty reliability.

It's not the cheapest or fastest drive on the market, but the Adata XPG SX8000 is a reliable drive that's suitable for most use-cases.