Solid state drives are now a stable, mature technology, but that doesn’t mean progress will slow to a halt 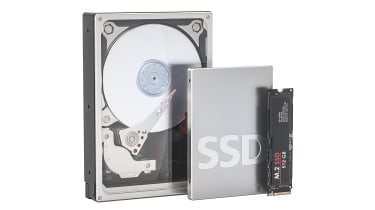 It doesn't seem long ago that solid-state storage was an exciting new technology. I remember the buzz when Intel's first SSD, the X25-M, arrived in the Labs. It had a capacity of 80GB - which even at the time felt pretty tight - and cost an eye-watering 440. It was slow by modern standards, with a maximum read speed of 226MB/sec over the then-current SATA-2 interface. Even so, in a world of mechanical drives, it felt like the future.

Today, SSDs have practically become a commodity. On the SATA side, performance is more or less uniform across the board, and even budget drives offer more longevity than any normal person is likely to need.

That's not to say the manufacturers are going to sit back and relax. In the newish world of M.2, there's plenty of scope for speeds to climb, and prices to fall. There's a big gap between this month's fastest and slowest NVMe drives, and even the mightiest of SSDs isn't yet capable of saturating the interface.

Even so, if you're wondering whether you should hold out for the next generation of NVMe drives, I'd suggest it's probably not worth the wait. To see why, you need only look at benchmark results measuring drive performance in popular desktop applications. The advantage of an SSD over a mechanical drive is impossible to miss - but beyond that, the difference between a cheap SATA drive and a lightning-fast M.2 model is remarkably modest.

That tallies with what we've observed many times in our own application benchmarks. Faster read and write performance is great for some specific tasks, but has little effect on everyday productivity. Often, the benefit of solid-state storage isn't about transfer speeds but latency.

Still, if the history of home computing teaches us anything, it's that more powerful hardware breeds more demanding software. As super-fast SSDs become increasingly common, I don't doubt that developers will increasingly find ways to exploit them - for example, by relying more on disk caching to free up valuable system RAM. Choosing a faster drive may bring limited benefits today, but it'll ensure you're well equipped for whatever the future brings.