Workplace monitoring: would you let your boss track your mood?

Tracking tools by Humanyze are in use at British firms, raising concerns about in-office surveillance 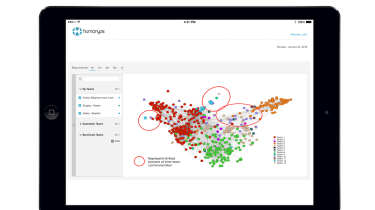 At least four British companies are using a tracking device that monitors employees' tone of voice, steps, and stress levels - but so far it's a choice, as 90% of the workers opted into the programme.

Technology from Humanyze is being trialed by Deloitte, a high-street bank, a retailer and some parts of the NHS, according to a report in the Times. The tech on trial is a tracker worn on a lanyard around the neck, which gathers data via Bluetooth, accelerometer, GPS and a microphone to monitor employee location, body language, as well as assess stress levels via voice analysis of the tone of conversations. It does not record their content.

"It's looking at the amount of time you talk, who you talk to, your tone of voice, activity levels, dynamics like how often you interrupt," CEO Ben Waber told the newspaper. "By mining that data, you can actually get very detailed information on how people are communicating, how physiologically aroused people are, and can make predictions about how productive and happy they are at work."

That could include uncovering how well an employee sleeps, that they interrupt colleagues too often, don't take the stairs instead of the lift, or aren't "optimised" for morning meetings, the report revealed.

The scheme has naturally raised concerns about privacy, however.

"These devices are part of a broader shift to a surveillance culture in the workplace," Pam Cowburn, communications director at Open Rights Group, told IT Pro. "While some degree of monitoring may sometimes be necessary, pervasive and intrusive surveillance may actually be counter-productive to good management and training."

Chris Brauer, director of innovation at the Institute of Management Studies at Goldsmiths, disagreed - he's previously worked on in-office tracking for brain activity and posture. "Employees tend to be very enthusiastic about participating in workplace trials involving wearables," he told IT Pro. "Despite all the hysteria, the goals will be typically beneficial to both the organisation and its workforce: increasing communication channels, recognising innovation, designing a better workplace."

Workers in these trials did appear "enthusiastic". None of the employees were forced to wear the device, but the company claimed 90% opted to do so.

However, Cowburn warned: "Staff may feel [pressured] into consenting to wearing surveillance devices because they fear that they will be discriminated against if they don't."

Renate Samson, head of Big Brother Watch, said choice was key. "Certainly an individual should be given the right to opt out without any detriment in how their employer sees them," she told IT Pro, adding it's helpful if the tracking has a clear goal, rather than worn for generic, all-the-time data collection.

The Citizens Advice Bureau points out that companies have a legal right to monitor their staff in "many situations", while Samson noted that employers already have the right to read your work-supplied email and look at your in-office web browsing without first asking your permission. "Work email belongs to the company, and it and your boss can access it without permission," she said, advising staff to carefully read their work contract and employers to make it clear what monitoring they do.

While workplace monitoring tools would likely fall under similar regulations, Samson noted that "this is a whole new area that needs more conversation".

Arguably it's difficult to discuss such technologies without first testing them, and the use of Humanyze in particular remains a trial, though companies have long used other workplace-monitoring tools, most of which focus on location for security purposes or for performance, rather than physiological data on their moods. "Wearables and sensors cover an increasingly wide domain of both technologies and enterprise applications. Gathering physiological data from workers is currently only a very small part of the market," said Brauer.

Are we turning into robots?

Indeed, such physiological analysis, or "people analytics" is different from most existing workplace monitoring tools, which tend to focus on optimising productivity, watching how much progress an employee makes, how often they leave their desk and so on. Examples include the Telegraph's attempted use of OccupEye, a box that monitors how often staff stepped away from their desks, or telematics in lorries to ensure drivers buckle up and behave safely.

Products such as Humanyze instead measure "softer" data points, such as employee well-being and stress, with rival systems such as Plasticity Labs polling staff to ask how happy they are. Do such mood-analysing systems even work? "We are gathering data all the time about both the reliability (are the results repeatable) and the validity (is the wearable measuring what it is purporting to measure) of emerging technologies of all kinds and wearables are no different," Brauer said.

Brauer argues that the focus on well-being, health and similar aspects of work are more sympathetic to the human condition than merely tracking location or counting how many widgets a worker produced.

"There are countless advantages to these kinds of technologies in the workplace," he argued. "They help make visible analytics and data around people instead of just looking only at machines or process flows that can really tend to dehumanise a workforce. You can identify pockets of innovation that need support, clogs and limitations to communications, promote collaboration and teamwork, and design and orient physical space in the interest of a healthier and more productive work environment."

However, Samson questions whether gather such data on human workers risks managers treating us like robots. "We all fear the robot revolution. We're all worried about our jobs being lost to robots but one of the solutions is not to make humans into robots," she said. "Appreciating a workers unique qualities, abilities to converse in a variety of different ways, and have natural human one-to-one interaction is critical. Formulising your workforce may actually cause more harm than good."