Stick or twist: Leaving a big tech company for a startup 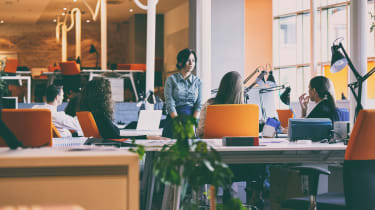 Working at the likes of Google or Microsoft can seem like a dream come true the opportunity to be part of a community that's at the forefront of the technology industry, a place to make a name for yourself.

For some, however, the excitement of working for a famous name, often with a big paycheck, can quickly dissipate. This can be especially true when faced with the grim reality of being another cog in a corporate wheel, constantly churning out projects with little enthusiasm in environments that often stifle personal development.

It's this desire to be part of something greater, to love your work and care for the products you create, that's helping to drive a startup scene that's claimed many disgruntled former industry veterans.

Jensen Harris, former director for Microsoft's Windows 8 portfolio, caused a stir on Twitter earlier this year when he shared his experiences of moving from Redmond to a much smaller technology company.

Leaving a big company job for a startup can rejuvenate your career and make you love work again.💖But landing a startup job requires relearning some things, especially if (like me) you logged years and years at Microgoogfaceforceazon.Here are six things I wish I'd known:

Having worked for Microsoft for 16-years, making a name for himself in the process, Harris decided to leave his secure job and run his own startup after he felt his career was only developing for the benefit of Microsoft.

"When I left Microsoft after 16 years, I had worked on what seemed to me to be a dizzying array of roles and products," says Harris. "Within Microsoft that was compelling, but to the external world, it was just 16 monolithic years."

Jensen's considerable skill set honed at Microsoft, where he led the creation of some of the most widely used and influential software in the world, offered him plenty of opportunities for work elsewhere at similarly sized technology rivals.

However, an unwillingness to repeat the last 16 years led Harris to not only look at smaller startups, but instead found his own.

He came up with Textio, an augmented writing platform that uses patterns in natural language to help create more effective marketing tools. It's an innovative idea, something Jensen feels startups can do fearlessly compared to the big companies.

"Startups are able to take the risks to try new things without needing to immediately serve hundreds of millions of users, whereas big companies are weighed down by the anchor of market expectations," says Harris. "Time and again, the biggest innovations in software have come from smaller, focused companies not afraid to invent something new."

Smaller startups may have the extra wiggle room needed for innovation, but they can't compete against the vast finances that established companies can leverage when hunting for, and retaining, talent.

They can offer large wages and huge bonuses as incentives to stay, a practice known commonly in the tech industry as 'golden handcuffs'. As the term suggests, it can be a little sinister.

"You don't have to handcuff people to a job they love, so I think there's something creepy built into that metaphor," says Harris.

It's not something that Harris believes ultimately drives tech professionals. He argues that innovation and creativity come from smart people being able to move from place to place, forging diverse insights with their experiences.

"Historically large companies have used startup acquisitions as their innovation pipeline not just for the ideas, but for the people who were motivated more by the thing they believe in building than by a role they are handcuffed to," he says.

He adds that having total belief in a project you are purely motivated by is more likely to produce the creation of something novel and groundbreaking.

Judging by the conversation Harris sparked with his advice post on Twitter, his experiences clearly resonated with many industry professionals. Yet for others, startups can be simply a means of injecting excitement into a career once again.

Having been an investment banker at Lazard for six years, Gus Tugendhat joined Thomson Reuters in a corporate development role and worked his way up to a managing director position before hitting a career roadblock.

"I did that till I was about 40 and then I got a bit bored really," says Tugendhat. "Maybe it was my age, or maybe it was because I wasn't learning anymore."

"I had lots of runway there it's a great company, but I felt I wasn't learning as much as I had. I was then approached to go work at a startup," he says.

The startup was a FinTech outfit called Red Deer Systems, which he felt was the right move for him at the time based on the position's description. But, after working there for 18 months he realised "it wasn't a good mutual fit" between the two parties.

"I don't regret leaving Thomson Reuters or joining Red Deer. Far from it," says Tugendhat. "It was the right thing to do at the time and I had absolute conviction that I wanted to do a startup, but instead of doing someone else's I wanted to do my own."

"Whatever I did next had to solve a problem, be really simple and it had to bring together a really good team of people. Red Deer was valuable not because it was a success, but because it was an experience that inspired me to do something I was infinitely more passionate about."

That inspiration and passion led to the formation of online data service Tussell, a startup that works with businesses to exploit opportunities in the UK's public procurement market. It's proved to be a successful venture, but the initial concept was born entirely from the experiences he garnered from his previous positions.

"There are a lot of people who will pay to follow the money in a marketplace as big, important and influential as what the government is spending money on, and I knew that from having worked in banking and having worked at Thomson Reuters," he says.

Having made the leap from the big company to the startup, both Jensen and Gus are keen to share the lessons from their respective experiences, but both agree that enjoying your work is far more important to your career than maintaining a long-held role.

"It's always good to go where you are wanted," says Tugendhat. "If people approach you and are trying to hire you, that is usually better than trying to knock the door down yourself."

It just felt like the right next step for me... going from a big company to a small company... stepping out of my comfort zone."