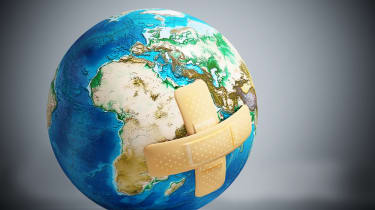 The UK's 'tech for good' sector is booming, according to Tech Nation, so much so, it's boosting the UK economy.

Tech startups that provide charitable services were worth 2.3 billion in 2018, with a turnover of 732 million, according to data published by Tech Nation. These figures top the amount produced by the consumer manufacturing sector, despite almost half of the UK's tech for good community having only raised seed funding so far.

The areas that seem most popular for socially aware startups were education technology, fintech and AI. The most familiar names in this sector include energy challenger Bulb, fashion recycling app Depop and Google's AI firm Deepmind, which it acquired in 2014.

The findings from Tech Nation's report will be discussed on Wednesday at a roundtable in Downing Street, hosted by the digital secretary Jeremy Wright.

"I'm pleased to see the UK's 'tech for social good' sector is not only having a positive societal impact but is also making a significant contribution to the economy," he said.

"We are working hard to support those in the field by improving charities digital skills, boosting access to finance for social tech ventures and backing an awards scheme to celebrate up-and-coming entrepreneurs. I look forward to meeting some of the sector's leading minds today to discuss how we can make sure the UK is a global leader in this area."

The report also emphasised the importance of social impact investors that value both social and financial return, such as Bethnal Green Ventures and Big Society Capital. To date, profit-seeking tech-for-good businesses in the UK have collectively raised 1.09 billion in venture capital.

Tech Nation's research comes as the social impact of disruptive technologies are under greater global scrutiny, as consumers are becoming increasingly concerned about the ethical credentials of digital products and services.

In the UK, the Department for Digital, Culture, Media and Sport has partnered with the Social Tech Trust to kickstart a fund of up to 30 million to provide access to finance. A further 1 million will be available to incentivise organisations to use tech to help tackle loneliness and bring communities together.

"This study provides a fascinating analysis of a fast-emerging sector within tech," said Gerard Grech, CEO at Tech Nation. "We are witnessing a new driver in tech startups.

"While the profit motive remains high, millennials are increasingly driven by the desire to make a meaningful impact on society. Harnessing the huge potential of tech allows us to really think big. We can have both economic growth as well as positively impacting society and the environment."