Buffalo makes its first foray into the enterprise with a NAS/IP SAN storage appliance is a solid effort, but there is room to improve. 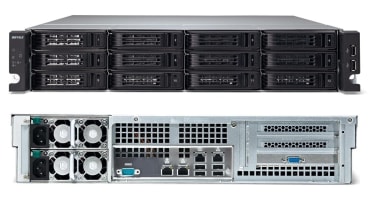 Buffalo Technology is strong in the consumer and SMB NAS appliance markets and its latest TeraStation 7000 series signals a move into enterprise territory. The family consists of three models with the flagship TeraStation 7120r Enterprise on review.

This 2U rack appliance employs a 3.4GHz Intel Xeon E3-1275 CPU partnered by 8GB of DDR3 memory. The latter can be upgraded but you'll need to replace the existing DIMMs as the motherboard only has two slots.

The Enterprise model is offered with all twelve hot-swap bays populated by 2TB WD Enterprise SATA II hard disks. You can't buy a diskless model and if a drive fails you must get your replacements from Buffalo.

You can't expand outside the box either as, unlike Synology's RS10613xs+ or Broadberry's CyberStore 316S-WSS, the 7120r doesn't support external disk shelves.

Buffalo also offers two standard 7120r models with 8TB or 12TB of storage and empty bays for adding extra drives later on. These are slightly different as they have a slower 3.1GHz Xeon E3-1225 CPU and 4GB of DDR3 memory. 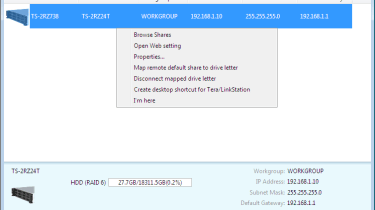 Installation is swift as you use the NASNavigator 2 utility to auto-discover the appliance. Along with direct access to the web management console, it provides a handy network share browsing and drive mapping service.

The web interface is the same as that presented by Buffalo's desktop appliances and is easy enough to use. For file sharing, the appliance supports SMB, NFS and AFP and each protocol can be enabled or disabled with a single mouse click.

Access security to shares is good as the appliance supports a local user database or authentication via an NT domain or Active Directory. Share creation is simplified as all features are accessed from a single screen where you can decide on global read or read/write access, select which protocols are supported, assign a Recycle Bin and apply access permissions. 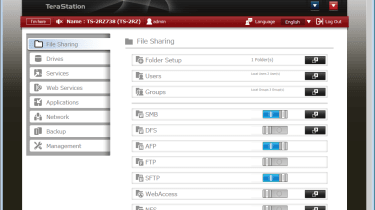 The 7120r supports share replication using Rsync but only to other TeraStations. It can manage scheduled backups of local data and when creating shares, you can enable the Backup option which allows them to be used as destinations.

The appliance has six USB2 ports for external storage devices but does not have any integral USB3 ports. If you want these you'll need to add Buffalo's optional USB3 PCI-e card which costs around an extra 35.

The bundled NovaBackup Business Essentials software makes light work of scheduled workstation backups and the price includes a 10-user license. Cloud backup features aren't as plentiful as those offered by Synology and Qnap as the 7120r only supports Amazon S3.

IP camera surveillance is another new feature although you'll need to use a Windows PC as a host for the Surveillance Server software. The appliance simply acts as a vault for camera recording as all schedules and camera configurations are managed at the host PC. 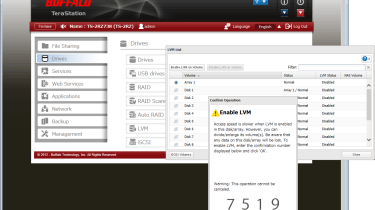 Before using the appliance, think carefully about how you plan to deploy it. If you want to provide both NAS and IP SAN services you will need to reconfigure the 7120r first.

Buffalo implemented its LVM (logical volume manager) feature in all its latest NAS appliances to allow them to support IP SANs but there are caveats. Out-of-the-box, the 7120r Enterprise has all drives pre-configured as a single RAID-6 array with LVM disabled.

This supports a single logical volume which can be used for NAS shares or one big IP SAN volume. LVM allows multiple NAS and IP SAN volumes to coexist in the same array but enabling it will delete any pre-existing shares on that array.

Disabling LVM on the array will also delete any shares and IP SAN targets. However, with LVM enabled, you can create dedicated NAS volumes that can be expanded into free space on demand. 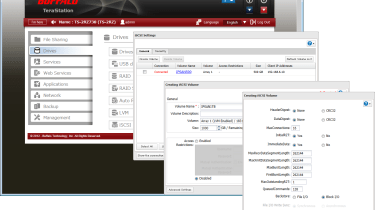 Along with the four embedded Gigabit ports, the appliance has two PCI-Express slots and supports a good range of single- and dual-port 10GbE adapters from Intel and Emulex. For testing we installed an Emulex OCE11102-NM dual port 10GbE adapter which was accepted without any problems.

For 10GbE implementations, we recommend enabling Jumbo frames. Iometer reported a raw read speed of 682MB/sec for a mapped share without them which jumped to 847MB/sec with 9,000 byte frames configured.

IP SAN performance over 10GbE was even better with Iometer reporting a raw read rate of 880MB/sec for a thinly provisioned 500GB target. Buffalo warns that LVM may have performance overheads but during testing we could see no evidence of these. Conclusion

The TeraStation 7120r Enterprise scores highly for performance and also compares well on price with similarly equipped 12-bay rack appliances from Qnap. Support for optional 10-Gigabit networking is a valuable feature although the lack of external expansion counts against it and Buffalo's LVM feature isn't the most elegant means of implementing NAS and IP SAN support.