A good looking wireless drive, which is let down by performance and price. 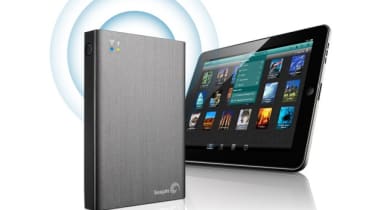 We're not used to seeing much innovation when it comes to mobile hard disks, but Seagate's Wireless Plus tries to stay ahead of the competition by cramming 802.11n wireless into its 20mm frame.

Cable free connectivity is becoming increasingly useful and Seagate has worked hard to make the Wireless Plus live up to its name. Connectivity is versatile: the drive can be used wireless with PCs and Macs, as well as Android devices using at version 2.3+ and iOS hardware using version 4.3 of Apple's software. 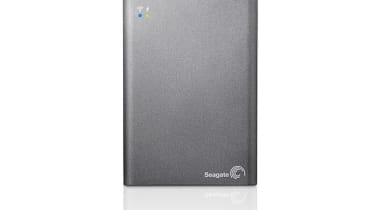 It's easy to get started. Turn on the Seagate's wireless button and it'll appear in your PC's wireless networks menu. Once connected, access to the drive is handled through www.seagatewireless.com - it'll detect the Wireless Plus and load its browser-based interface.

From here, the Seagate's folders can be browsed and movies, documents, songs and pictures can be viewed, moved and opened. Content can be streamed from the disk to any DLNA-equipped device, and desktop formats also allow content to be uploaded from a computer to the Wireless Plus - a feature that isn't supported on the two smartphone systems.

Access on iOS and Android devices is through a free app, and the structure is broadly similar, with navigation handled through a near-identical UI. It's easy to use, intuitive, and we didn't experience any performance issues when using the Wireless Plus across any platform.

Remove a blanker from one end of the Wireless Plus and you'll find SATA/300 and SATA power connections. Seagate includes an adapter in the box, and it turns this drive into a traditional, USB 3-powered external hard disk.

It's here where the Wireless Plus falters. The Seagate ran through CrystalDiskMark's sequential read and write benchmarks at 103MB/sec - half the speed we'd expect to see from top desktop hard disks.

The situation became worse as files became smaller. The Seagate read and wrote 512KB files at 38MB/sec and 45MB/sec, and it laboured to 4K file read and write speeds of 0.4MB/sec and 0.9MB/sec.

It's clearly not a drive built for speed, and it's easy to see why when you look under the hood. The Wireless Plus is built around a 1TB Seagate Momentus, which is a mobile drive that spins at 5,400rpm - slower than the 7,200rpm pace of desktop hard disks. It's only got 8MB of cache, too, which doesn't help matters - top desktop disks have 64MB. 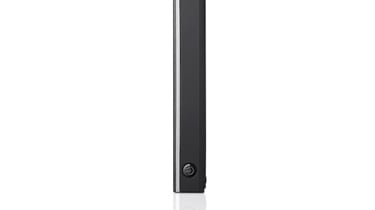 The Wireless Plus is a well-built, good-looking drive, and its wireless connectivity and software work extremely well: it's easy to use on PC, and the free app allows for media access and streaming on a wide variety of mobile devices.

The Seagate's wired performance leaves a lot to be desired and the price is high. The hard drive costs 191, which is three times the amount you'll pay for a decent, non-wireless 1TB external disk.

That price and poor USB 3 performance means we can't give the Wireless Plus a whole-hearted recommendation. It's only worth such a high outlay if you regular consume media on your smartphone or tablet.

Seagate's Wireless Plus includes effective, easy-to-use wireless access from PCs and Macs as well as a huge variety of Android and iOS smartphones and tablets, and it's easy to both access and stream media when you're on the move. However, the high price and poor USB 3 performance mean that this is only ideal for mobile media fans and frequent travelers.