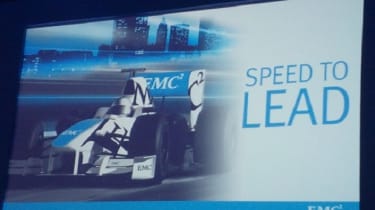 EMC has expanded its VNX mid-range family of unified storage arrays to include Flash-optimised systems based on Intel's multi-core Sandy Bridge technology.

The company claims the new systems can be used to deploy six times the number of virtual machines compared to the previous generation of VNX arrays, making it more cost effective for end users to take advantage of virtualisation.

The systems also offer four times the performance of the other members of the VNX family, EMC added, at a third of the price of the previous generation.

This is made possible, in part, by the inclusion of EMC's Multi-Core Optimisation software (MCx), which can be used to speed up virtualised applications.

Speaking at the storage firm's Speed2Lead launch event in Milan, Italy, Rich Napolitano, president of the unified storage division at EMC, confirmed the new additions to the VNX range are shipping now.

"This new platform really is revolutionary...It's [a] unified [storage system], so it's block and file. It's tuned to take advantage of Flash and [delivers] a huge number of IOPs per second at extremely low latency," he said.

Further to this, the company also took the wraps off an all-Flash version of the VNX to support users that require consistently fast performing storage, before confirming the VNX will soon form part of its VSPEX reference architecture product.

The latter was announced by the company in 2012, and traditionally consists of EMC storage and backup, as well as virtualisation, server and networking technology from the likes of Brocade, Cisco, Intel, Microsoft, VMware and Citrix.

The inclusion of VNX will allow the system to support 1,000 virtual machines, EMC claims, which twice the number of workloads it could handle before.

David Goulden, president and chief operating officer of EMC, said multi-core technology, Flash and virtualisation will all play an important role in helping enterprises cope with the demands imposed on them by big data.

"The question should be [in the big data era] how are datacentres going to handle this massive growth in information, because it's not slowing down. The answer to this question is you have to leverage...multi-core technology," he told delegates.

Also, with the price of Flash storage falling all the time, it's becoming even easier for enterprises to adopt it, Goulden added.

"Flash storage is disruptive, it's still much more expensive, but it offers exceptional technology," he said.

"The price difference is coming down, so there are many more use cases where you can justify Flash technology."