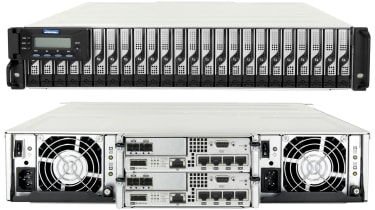 This 2U chassis has room for up to 24 SFF SAS or SATA hot-swap hard disks. Hardware redundancy is excellent as the device comes with a pair of hot-plug PSUs (combined with cooling fans) and dual controllers.

The controllers in the review system each have quad Gigabit iSCSI data ports plus the dual-port 16Gbps FC module. Other modules offered by Infortrend include quad 8Gbps FC or Gigabit iSCSI, dual 10GbE SFP+ or RJ-45 and dual 6Gbps SAS for direct attached storage. 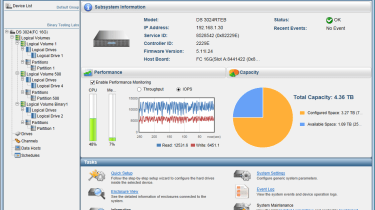 Each controller also has a 6Gbps SAS expansion port for daisy-chaining additional disk shelves via dual redundant links. You can mix and match Infortrend's JB 2024B, JB 2048 or JB 2060 disk shelves and the 3024RTEB supports a maximum of 360 drives.

Before you start dishing out storage it's worth getting to grips with how the new controllers function as this isn't obvious from the vague user manual. Controllers A and B function in active/active mode so all ports on both of them are available.

Host connections to the secondary controller are your redundant links. These are assigned to MPIO links but bandwidth is not aggregated with the primary link and are only used if the latter goes down. 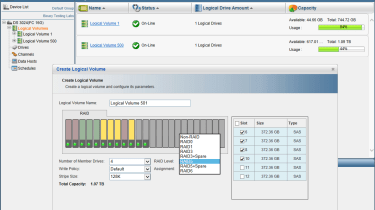 The controllers have dedicated network management ports but only the one on controller A is active. If it fails, its management IP address is shifted over to controller B for uninterrupted access.

For single array management you have the embedded RAIDWatch browser interface while the SANWatch utility remotely manages multiple devices. The interfaces are very similar but tasks such as snapshots, volume copies and replications can only be run from SANWatch.

When configuring storage, you create logical volumes with selected drives, choose a RAID array type and assign it a primary controller. This creates a logical drive in the volume and within this you create partitions which are the actual storage devices to be presented to servers

During partition creation you can enable thin provisioning and enter a percentage of the maximum size it should start at. Partitions are then mapped to the FC or iSCSI ports on either or both controllers. 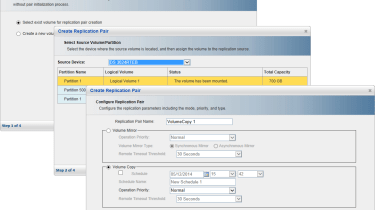 Snapshots provide point in time copies of volumes with the standard license supporting 64 per volume and 128 per system. An advanced license upgrade increases the snapshot count to 256 and 4,096 respectively.

Snapshots can be run manually or to a schedule and for partition rollback you just select a snapshot from the list that you want to restore. Snapshots can be mapped to a host port and if the partition is being used by multiple hosts you'll need to install the SANWatch data agent on each one which flushes the cache prior to a snapshot being taken.

The optional replication feature adds volume mirroring and copying to the mix. Remote replication across two arrays is available and Infortrend has recently added a data tiering option where hot data is moved to SSDs. 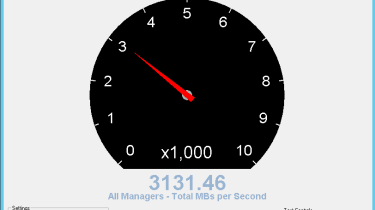 With a single direct attach FC connection, we saw Iometer return an impressive raw read speed of 1,560MB/sec. Looking back at our review of the 8Gbps FC equipped HP MSA 2040, we could see this was nearly twice as fast.

We then connected the server's second FC port to the partition's primary controller and saw raw read speed double to 3,132MB/sec nigh on 24.5Gbps. For database testing, we used 256 outstanding I/Os, a 16KB block size, 66 percent read, 34 percent write and a 100 percent random distribution. Over the dual-port FC connection Iometer returned an impressive 16,750 IOPS.

We also tested failover using the iSCSI ports where we created an MPIO connection using a link to each controller. As expected, Iometer returned an average raw read speed of 113MB/sec for the target which continued unabated when we pulled the network cable from the primary controller.

Infortrend's hybrid controllers make the EonStor ESDS 3024RTEB very versatile as their 16Gbps FC ports provide high-speed data access whilst the iSCSI ports can be used for low cost disaster recovery replication. Performance is impeccable and it crams in a lot of features and expandability for the price.

A versatile disk array with a tempting price tag. The ESDS provides top Fibre Channel performance, the compact form factor and affordable price and you have an ideal all-round storage appliance for SMBs.