USB vs Thunderbolt: Which is better?

With faster transfer rates and increased versatility is it time you invested in Thunderbolt?

Integrated into all motherboards, PCs and laptops everyone who's ever used a computer has come into contact with the Universal Serial Bus (USB). Since its inception in 1995, it's gone on to become one of the most useful and recognisable interfaces on the planet.

The latest challenger to USB is Thunderbolt technology, which was co-developed by Intel and Apple. Theoretically faster than USB and capable of hooking up more peripherals it looks like the better option on paper. But do you need it?

USB has seen a vast improvement in speed over its 20-year lifespan. Its maximum bandwidth has risen from 1.5MB/s to 625MB/s. The forthcoming USB 3.1 will double this to 1,250MB/s and is expected to be in products before the end of 2014.

Despite being released in 2011, Thunderbolt development has zipped along and Intel is prepping the third generation.

Thunderbolt 2 is available in the latest Retina MacBook Pros and Mac Pro desktops and is twice as fast as the next-gen USB 3.1. It takes the two 10Gbit/sec channels of the original specification and combines them into a single 20Gbit/sec channel (2,500 MB/s). This is a crucial step forward for improved data transfer, such as daisy-chained 4K displays. 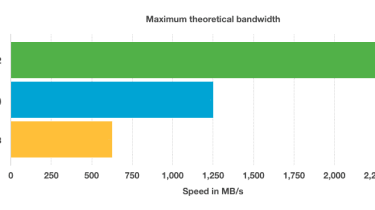 Winner: Thunderbolt  - This is 4x faster than USB 3 and will also offer twice the throughput of USB 3.1

Thunderbolt 2 has the theoretical advantage over USB but this doesn't automatically translate to superior real-world performance. If you're using either connection with an external hard disk, this will act as a bottleneck as the platters inside any hard disk won't keep up.

The situation doesn't necessarily improve if you use an SSD. While flash-based drives are faster than hard disks, USB 3 and Thunderbolt are fast enough to saturate the bandwidth served up by any consumer SSD.

Sister title PC Pro illustrated the bottlenecking caused by hard disks: in its tests it found that file reads and writes remained virtually the same when USB 3 and Thunderbolt connections were used on hard disk-based external drives.

There still wasn't a huge gap between USB 3 and Thunderbolt when SSD-based products were tested. Both interfaces returned similar pace when opening photos, backing up folders and loading games, with only a significant improvement gained when backing up files from a RAM disk.

Right now, USB 3 and Thunderbolt are neck-and-neck but only because the surrounding technology isn't capable of utilising the speed provided by Thunderbolt.

Winner: Draw - Once storage based around PCI Express and M.2 connections are common, we'll see Thunderbolt take a convincing lead in the area of data transfer.

Thunderbolt is in its infancy and there is a high cost of entry. Apple's Retina MacBook Pros are priced comparably to high-end Windows rivals, but you'll still have to shell out over 1,000 and the Mac Pro starts at a wallet-busting 2,499.

Thunderbolt's high prices are caused by the cost of the controller required to drive the port. Rumours suggested the first wave of devices were hampered by chips priced at 120 per controller, and reports suggest it still costs 20 a pop to licence.

The peripherals are not cheap and you'll struggle to find a high-performance SSD for less than 200. Enterprise-grade peripherals will cost the same as a Ultrabook. For example, a 1TB Lacie SSD designed for storing and transferring 4K video will set you back 989. As a sidenote most manufacturers don't include a Thunderbolt cable in the box so you'll have to add another 20.

USB benefits from its ubiquity. It's universal usage means cables, enclosures and adapters are available at budget prices.

A 1TB USB 3 external SSD can be picked up for as little as 50 so if you're counting the pennies, there's only one choice.

Winner: USB - This is widely used helping to make it considerably cheaper.

Thunderbolt has PCI Express and DisplayPort integrated into it - the latter allowing it to connect up 4K displays. The interface also allows you to run six daisy-chained displays from one Thunderbolt connection, for example.

Of course daisy-chaining isn't restricted to monitors, as you can hook up multiple peripherals ranging from storage devices to video capture gadgets.

Thunderbolt works with PCI Express too, allowing it to handle workstation-level tasks like Genlock and Fibre Channel, the high-speed networking technology. One final, overlooked point concerns the physical design of connectors: Thunderbolt ports are 4mm narrower than USB 3 connections, which means they'll fit in tinier spaces on smaller devices.

Meanwhile, USB is restricted to hooking up storage devices along with peripherals such as memory sticks, mice, keyboards, printers and mobile devices. It also provides charging power for handheld devices but lacks the ability to connect monitors.

Winner: Thunderbolt - Has the ability to hook up displays and daisy chain peripherals without sacrificing performance.

Thunderbolt has won two categories (speed and use cases) whilst USB is the cheaper of the two. At this time performance remains a draw because of bottleneck issues caused by external devices.

To get the best out of Thunderbolt you'll need to spend a lot of money as you'll require high-end workstations and the fastest possible external storage drives. Fail to get the latter and performance will suffer.

USB's strengths lie in its convenience and affordability. It's not able to move data at the speed of its rival a downside that will be increasingly exposed as the bottlenecks are eroded.

If you want to save money and if you're not handling workstation-level tasks, then USB 3 will cater to your needs.

For power users, the versatility and support for high-end office workloads, means Thunderbolt is worth the extra cash. Plus it's only going to get better.

Winner: Thunderbolt - It's expensive but you'll get value for money in the long-run.