Solid-state storage is found in everything from smartphones and tablets to servers and workstations. Flash has become the dominant form of memory because it's faster than traditional spinning hard disks, more reliable, and prices have dropped dramatically.

Most new laptops and use SSDs as standard or at least have a hybrid HDD/SSD combination. Flash memory can also inject life into existing systems. Upgrading your office PC or laptop with an SSD can improve boot times by up to 3x when compared to traditional hard disks. Applications will also load faster, and laptop battery life may benefit as SSDs use less power than hard disks.

We rounded up five of the best drives on the market to find out which are the most tempting options whether you're looking for speed or value.

Our benchmarking procedure tested every aspect of these drives to find the best performer. Applications including AS SSD and CrystalDiskMark were used for a variety of tests. We measured sequential read and write benchmarks to evaluate raw pace, and we and test each SSD's 512KB and 4KB file abilities perfect for identifying strengths and weaknesses with medium- and small-sized files.

Atto Disk Benchmark was deployed to test the read and write pace of each drive across a wider gamut of file sizes. Our final test, IOMeter, measured how each drive handled a variety of workloads over long periods of time an important ability for an office SSD. Each test was run for 30 minutes.

The Samsung and SanDisk drives lead the way in warranties, with 10-years of coverage included with each SSD.

Intel's drive is backed by a 5-year deal, and the Crucial and Toshiba drives are only covered for 3-years.

This is the newest drive and most innovative drive on test as it uses a 3D V-NAND design. This technology makes a major change to the structure of the transistors used deep inside the silicon to create memory chips.

Transistors in this SSD are stacked vertically instead of horizontally. The design allows Samsung to cram in more transistors and aim for higher capacities without the squeeze on size that causes electrical leaks and inefficiencies in previous drives.

Samsung's 3D V-NAND innovations aren't cheap: the 512GB drive we tested cost 276, or 54p per gigabyte, making it the most expensive SSD. 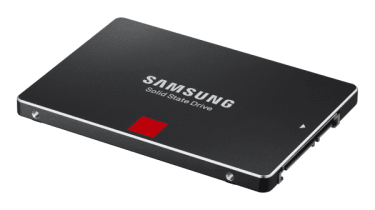 Another high-end drive, the Extreme Pro is built using 19nm MLC NAND borrowed from Toshiba's faster drives. It's controlled by a Marvell 88SS9187 chip, a piece of hardware in use since 2012, but SanDisk has given it a boost with Custom firmware. 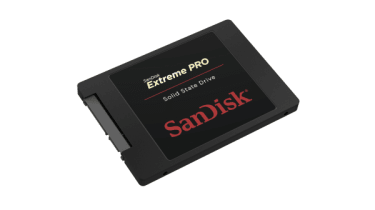 Toshiba is secretive about the hardware inside its SSDs. The firm uses 19nm MLC NAND made in-house, and also produces its own controllers but doesn't divulge details. The drive uses the slim 7mm form factor, and their studded metal exterior is ugly. 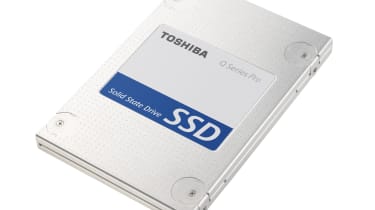 The Intel 2500 Series SSD is built using 20nm MLC NAND and uses an unremarkable SandForce SF-2281 controller, which has been around for a couple years. Intel hopes to add value with business-friendly features like vPro and a software tool that allows for remote drive management.

This drive also uses Opal 2.0 and eDrive encryption, but that's also available on the Samsung and the Crucial MX100. Toshiba and SanDisk omit this feature from their drives. 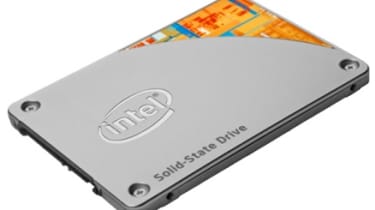 The budget price tells when it comes to endurance. The MX100 is rated for 72TB, only higher than the 36.5TB rating of the Intel drive. Other SSDs promise longevity: the SanDisk is rated for 80TB, and the Samsung for a mighty 150TB. Typically, Toshiba keeps quiet about those figures. 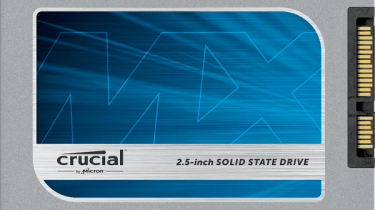