Our first benchmark, AS SSD, tested drives in a number of different ways. The sequential read and write benchmark evaluated the raw speed and 4K test indicated performance with smaller files.

The Samsung and Sandisk SSDs traded blows in the read and write sequential tests. The SanDisks' 522MB/s read speed topped the test, but the 850 Pro took back the lead with a 498MB/s write pace. 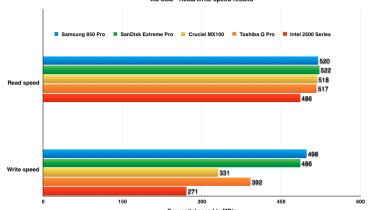 In the 4K and 4K-64 read benchmarks the Samsung hit 38MB/s and 384MB/s, which topped our results table ahead of the SanDisk and Crucial drives. The 850 Pro's 4K-64 write pace of 308MB/s was the best here, too, but the budget Crucial MX100 took a surprise victory in the 4K write test with a pace of 124MB/s. That's 3MB/s better than the second-placed Samsung.

The two other drives, Intel's 2500 Series and the Toshiba Q Pro, failed to impress. The Toshiba came fourth out of the drive SSDs in most of the AS SSD benchmarks, with Intel propping up the table in all but one of these tests.

This application performed similar tests to AS SSD and threw a 512KB benchmark into the mix too perfect for evaluating large file performance.

Again it was the Samsung SSD leading the way in the sequential read and write sppeds and was the only drive to top 500MB/s in both tests. SanDisk's Extreme Pro took second place, whizzing through the tests at 536MB/s and 495MB/s. 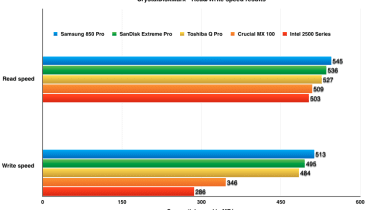 The affordable Crucial drive popped up again: in the 512K read benchmark, its 464MB/s pace was the best here. Surprisingly, the 443MB/s scored by the Toshiba was good enough for second place, with the Intel in third and Samsung in fourth position.

The Samsung and SanDisk drive regained first and second spots in the 512K write tests, and the Samsung drive continued to lead in the 4K read and write benchmarks with results of 42MB/s and 151MB/s. In the read test the SanDisk came second, and the MX100 took the silver medal in the write benchmark.

CrystalDiskMark's final test, the 4K-32 benchmark, the 850 Pro dominated with read and write speeds of 404MB/s and 356MB/s. SanDisk's drive was comfortably in second place, with the Crucial and Toshiba trading blows for third and fourth position. As with many of the CrystalDiskMark tests, Intel languished in last place.