The spectacular performance is backed up with a generous warranty, great endurance and encryption features. It's the most expensive SSD in this group (276), but this is jutified as it is the best in every department. If you or your company can afford it, the 850 Pro is the SSD you should buy.

SanDisk's drive costs the same as the Samsung and flashes of pace in some benchmarks are undermined by a lack of speed elsewhere that was highlighted in some of our Atto and IOMeter tests. The shorter warranty and lack of encryption don't help, either.

Intel and Toshiba's drives are cheaper and slower. They are are caught in the middle ground unable to compete with the pacier Samsung, while being undercut and out-performed by the Crucial. The MX100 is our budget choice: we're willing to forgive some of its poorer results because of its bargain price and, in other tests, rapid speeds mean it's able to punch above its weight. 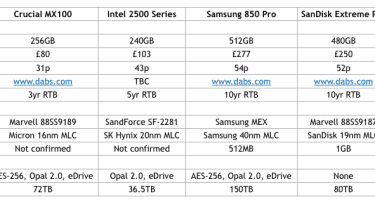