Built like battleship the ioSafe’s 1513+ is fireproof and waterproof making it the ultimate disaster proof NAS appliance. 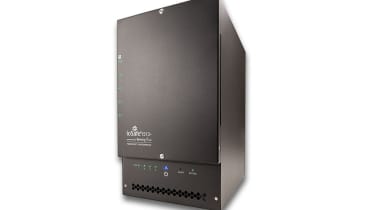 Don't trust third party cloud providers to backup data and need on-site disaster protection? Look no further than the battle hardened ioSafe 1513+. This encases the guts of a Synology NAS appliance inside a chassis as strong as the Incredible Hulk.

It's certified to withstand temperatures of 1500F (815C) for 30 minutes and total immersion in fresh or salt water to a depth of 10ft for up to three days. So it'll still be standing, even if your workplace isn't.

To protect data, the ioSafe uses three proprietary technologies - HydroSafe surrounds the five internal hard disks with a waterproof barrier. The DataCast fire resistant insulation is designed to release water vapour above 160F (71C) to keep internal temperatures down in the event of a fire.

Finally, FloSafe provides essential air flow throughout the hard disk case. If excessive heat levels are detected, its closes the chassis air vents to provide further protection and doesn't require any power to do this. 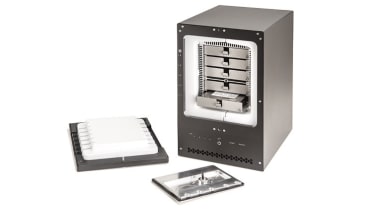 It's in the build

The 1513+ is big with the mighty chassis measuring 375 x 221 x 320mm. It dwarfed a Synology DS1813 we had on the bench next to it and picking it up gives a clear indication of build quality as it weighs 27kgs fully populated.

The front panel is secured with two Allen screws and behind this is the hard drive enclosure nestling in a thick layer of DataCast insulation and protected by a solid waterproof metal door. One more Allen screw later and we popped the door off to reveal the hard disks inside.

This is a Synology DS1513+ in disguise so you get the same choice selection of ports which include quad Gigabit, 2 x USB 3 and 4 x USB 2. The pair of eSATA ports can be used to add ioSafe's soon to be launched N513X five bay expansion units and you can expand existing RAID arrays on to them. 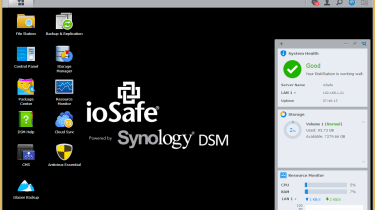 Synology's DSM 5.0 has the best designed interface and is chock-full of storage features

With Synology at the helm you get all the benefits of its latest DSM 5.0 software. The slickly redesigned web console is easy to use and can be customised with different backgrounds.

First time installation is a cinch as you don't need to use the Finder utility any more. Just point a browser at Synology's URL and it'll discover the new appliance and download and apply the latest firmware.

RAID options are extensive and the five 2TB drives in the review system came preconfigured in a hybrid array which allows you to mix and match drives of different sizes and makes. Read and write caching using SSDs is available although this is of less value as it reduces storage capacity potential.

Along with a wealth of NAS features, the 1513+ offers IP SAN services plus thin provisioning. Enable the advanced features during iSCSI LUN creation and you can manually create snapshots for point-in-time read only copies and clone LUNs. 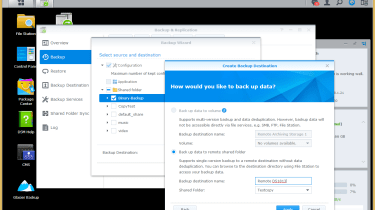 These translated into fast real world speeds with drag and drop copies of our 50GB Iometer test file returning sustained read and write rates of 111MB/sec. General backup ops won't be a problem either with our 22.4GB mix of 10,500 small files copied to a share at an average of 86MB/sec. 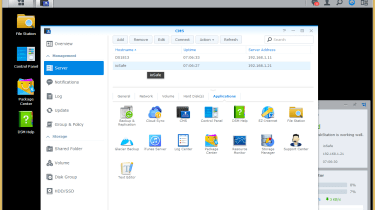 If the 1513+ does become toast you can use ioSafe's Data Recovery Service (DRS) which is included in the price. It will attempt to recover the data and if unsuccessful it'll pass the appliance onto DriveSavers.

The DRS Pro service insures against the cost of recovering data on the appliance and one attached computer and includes a replacement appliance. The plan covers the first data recovery event' with an incremental charge for subsequent events.

The 1513+ still only represents a single copy of your data so is not a substitute for regular data backup. DSM offers plenty of options as it can manage backups to other Synology or Rsync compatible NAS appliances while the new Cloud Station app synchronises folders between two Synology appliances

If you do want to use the cloud you have integral support for Amazon's S3 and a separate app for its cheaper Glacier service. The Cloud Sync app can also synchronise folders with Google Drive, Dropbox and Baidu Cloud accounts.

The ioSafe 1513+ offers a bullet-proof front line defence against disasters. With the 10TB model on review costing a hefty 3,286 it is pricey but to put this in perspective just ask yourself how much your data is worth to your business.

It’s expensive but ioSafe’s 1513+ is the roughest, toughest NAS appliance on the planet. A fine choice for on-site data protection, it’s a top performer and with Synology behind the scenes, it isn’t short on features either.