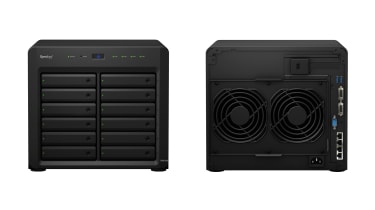 Synology's DS3615xs aims to put more storage on your desktop than any other NAS appliance. Expansion potential is also unbeatable as its high-speed Infiniband ports support a pair of 12-bay DX1215 expansion units allowing capacity using certified 6TB drives to be upped to 216TB.

At its heart beats a fast dual-core 3.4GHz Intel Core i3-4130 CPU partnered by 4GB of DDR3 memory. The latter is expandable to 32GB although you will need the replace the pair of 2GB DIMMs to achieve this.

Port options look good as you have quad Gigabit plus dual USB 3. The appliance is 10GbE ready as its PCI-Express X8 expansion slot supports Synologys' adapters and industry standard 10GBE HBAs from Emulex and Intel. 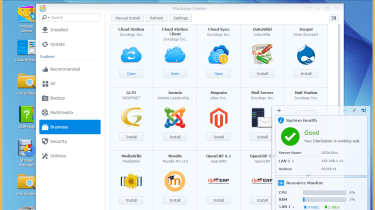 Synology's DSM 5.1 delivers a wealth of features including a choice selection of backup tools

The appliance looks well built with a sleek charcoal-black metal chassis and removable side panels incorporating discrete cooling grills. Disk loading is totally tool-free as the hot-swap trays have plastic clips down each side that snap into the hard disk screw holes.

The two 12cms diameter cooling fans at the back run xquietly and the complete unit can be removed and replaced just by pulling the four plastic locking pins out. However, as we found to our cost, be very careful when pushing it back in as its power pins don't line up perfectly with the chassis' power receptacle and are easily bent.

For performance testing we installed an Emulex dual-port OCE11102-NM 10GbE adapter in the appliance's PCI-Express slot. Access is very easy as you only need to remove the top two screws and slide the lid back.

However, we have concerns about the limited amount of space at the back. Although the Emulex HBA is only a half-height, half-length card, we noticed its back edge only cleared the bare metal drive cage below by a couple of millimetres. 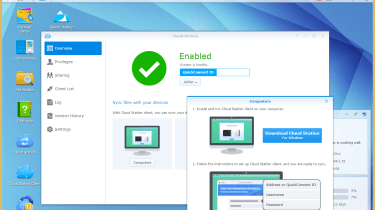 Synology's DSM software gets better with every release and small businesses will love the backup features of v5.1. Using the standard DSM backup app, we could replicate to other Synology appliances, backup up folders to another local location and use the built-in support for Amazon S3 and Microsoft Azure cloud storage.

There are separate apps for ElephantDrive and SymForm and we had no problems using the app for Amazon's Glacier service. Synology has dropped its Data Replicator backup utility but the replacement Cloud Station app is much easier to use.

We loaded the Cloud Station client on a Windows 7 desktop and declared folders we wanted synced. After linking up with the appliance, it backed them up to the user's home folder and proceeded to update them in real time.

We like the Cloud Sync app even more as it now supports OneDrive, box and hubiC and well as Google Drive, Dropbox and Baidu Cloud. The DS3615xs also runs Synology's Central Management System (CMS) app which we used to remotely manage and monitor the lab's DS1813+. 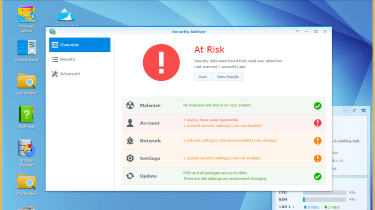 DSM's Security Advisor pinpoints any weaknesses in the appliance's armour

With a share mapped to the server, Iometer reported fast raw sequential read and write speeds of 8.8Gbits/sec and 8.7Gbits/sec. Real world performance was equally impressive as drag and drop copies of our 50GB Iometer test file returned 432MB/sec and 386MB/sec.

The DS3615xs is no slouch in the IP SAN department either with a 500GB iSCSI target scoring Iometer raw read and write rates of 8.8Gbits/sec. With a dual 10GbE MPIO link in action, we saw speeds boosted to a respectable 14.9Gbits/sec and 13.4Gbits/sec. 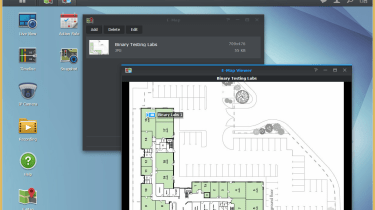 The best of the rest

The DSM 5.1 interface is well designed and provides easy access to the myriad features. RAID arrays are created from the Storage Manager app and the DS3615xs supports all the usual suspects including dual-drive redundant RAID6.

The Security Advisor scanned our appliance, told us we were malware free and offered sage advice on tightening up account passwords and updating installed packages. In fact, security is a major focus as we could assign services to specific network ports, use authentication for application privileges and set up IP-based access rules.

The big capacity of the DS3615xs makes it ideal for video recording and Synology's Surveillance Station doesn't waste this potential. We tested the latest v7.0 beta version and found its newly designed interface a pleasure to work with.

You only get two licenses included but our D-Link IP cameras were easily added using the discovery wizard and we could set up recording schedules for them. The new Action Rules feature is very handy as it allowed us to use motion detection triggers to fire off snapshot and recording schedules.

The DS3615xs won't be beaten for capacity as no other vendor offers a 12-bay desktop box and, as long as you're aware of them, the two design glitches aren't major issues. It only costs around 100 more than Qnap's 10-bay TS-EC1080 Pro so value is good and it gets extra marks for its embedded Infiniband ports and high expansion potential.

The DS3615xs delivers the highest storage capacity for a desktop appliance and teams it up with a big expansion potential. Performance over 10GbE is excellent and Synology’s DSM software won’t be beaten for features.