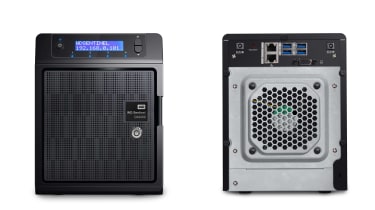 Parity volumes provide the best redundancy but they'll hurt write speeds. Copies of a 50GB test file from a Dell PowerEdge R730 rack server to a share on a parity disk returned a write speed of only 55MBps.

Read speeds aren't affected as copying the file back to the server saw 113MBps. The poor write speeds of parity disks will be an issue if you're planning on using the DX4200 as a backup device securing our 22.4GB test folder and its 10,500 small files returned only 47MBps.

Running the same tests on a mirrored virtual disk delivered superior speeds. The 50GB file copy gave us an average write speed of 106MBps while the 22.4GB folder mustered a much more respectable 77MBps.

IP SAN performance is very similar with a 500GB target on a parity volume returning Iometer raw read and write speeds of 113MBps and 51MBps. Moving over to an iSCSI target on a mirrored volume saw read speeds increase to 112MBps. 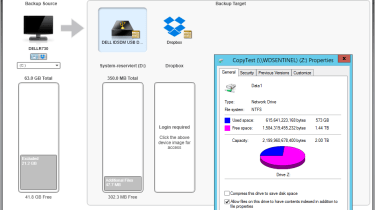 Our test client has a share mapped from the DX4200 but the SmartWare Pro software couldn't see it.

The DX4200 includes a 25-user license for the SmartWare Pro backup software but if WD has bothered to test it they'd have found, as we did, that it doesn't actually work. The bottom line is the appliance's mapped shares and iSCSI volumes don't show up as backup targets in the software's interface.

We discussed this with WD which passed our findings on to its US development team. It eventually came back and confirmed that we had, indeed, found a bug in the software and assured us it was working flat out on a fix.

That was over a month ago and since then WD has remained ominously silent. For the time being, the SmartWare Pro software can only be used to backup data to another local volume, an external USB drive or a Dropbox account.

The Sentinel DX4200 scores for ease of use and offers a generous storage capacity for the price. It works hand in glove with Windows networks but performance is a mixed bag and you should ignore the buggy SmartWare Pro software