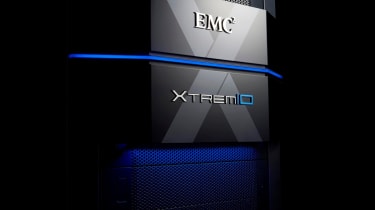 EMC has doubled the density of its XtremeIO-based X-Brick all-flash storage arrays as well as increasing the number of arrays the software supports.

Its new 40TB X-Brick flash storage systems are double that of the previous generation, while the update to XtremeIO 4.0 increases the cluster node limit from six to eight.

This means that raw maximum capacity of an XtremIO cluster node increases to 320TB.

At a keynote at EMC World in Las Vegas, Guy Churchward, president of EMC Core Technologies, said that with a six-to-one data reduction ratio, the capacity of full cluster increases to 1.9PB.

Churchward said that the update to XtremIO meant that it has transformed not only the speed at which applications run but also the entire way in which they are deployed.

The system is also capable of two million IOPS and a latency of less than 1ms.

The XtremeIO software also gains native replication due to a boost in speed in the firm's RecoverPoint software to help it keep pace with the all-flash platform. Xtreme 4.0 can create a replica every 60 seconds, according to EMC.

Unlike the previous version, XtremIO 3.0, the latest version can be upgraded without disruption with automatic rebalancing and no application downtime, according to the firm.

The latest version of XtremIO is being released as a free update to 3.0 customers.

Multiple clusters can be managed from one XtremeIO Management Server system.

The interface has had an update and now includes extended historical reporting, maintaining two years of operating history, as well as sophisticated tagging and search functionality for handling large numbers of provisioned volumes, hosts and snapshots. It also boasts improved built-in reporting capabilities.

Churchward added in the keynote that the product has grown faster than expected and was approaching $1 billion in revenues 18 months after release.

"XtremeIO has been a rocket ship success for us," he added, with the company claiming that more than 1,400 customers, including 40 per cent of Fortune 100 companies were now using the systems within their organisations.