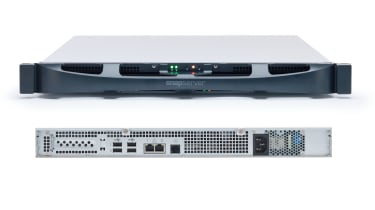 The Snap Server family has survived longer than any other brand in the NAS appliance market. It was introduced by Meridian Data back in 1998 and since then it's been passed between Quantum, Snap Appliance as well as Adaptec before finally coming to rest under the auspices of Overland Storage in 2008.

We've reviewed the latest Snap Server XSR 40 to find out why this family of appliances keeps on going. It can't be the hardware as this 1U rack NAS has a basic 1.8GHz Atom D525 CPU partnered with 4GB of DDR3 memory which can't be upgraded.

You can buy prepopulated appliances or diskless models but for the latter, the drives must be purchased from Overland Storage. We tested the base 4TB model on review and its price tag of 1,247 ex VAT is over twice the cost of a similarly equipped Synology RS815.

The XSR 40 wins for expansion though, as it supports up to three 12-bay SnapExpansion XSR disk shelves for a maximum raw capacity of 240TB (6TB disks are the highest capacity models currently supported). The disk shelves cost around 2,000 each and you'll need Overland's SAS expansion card which costs a further 101 and fits in the main appliance's PCI-Express slot.

Initial installation was swift as we slotted in the four pre-populated hot-swap drives carriers, powered the unit up and waited the requisite 10 minutes while it initialized. Then it was over to the web interface where a quick startup wizard guided us through configuring basic details such as securing admin access, network port addresses and choosing a RAID array.

The XSR 40 runs Overland's Linux-based GuardianOS which provides some useful storage features including DynamicRAID. Similar to Synology's Hybrid RAID arrays, it allows you to mix and match drives of different sizes in a storage pool and it supports single- or dual-drive redundancy.

Another advantage of DynamicRAID is you can add larger drives when you want and they'll be automatically incorporated into the storage pool. If you want features such as global hot-spares or user and group quotas you can opt for a traditional RAID arrays. 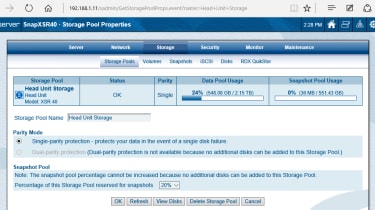 GuardianOS supports Windows, Mac and Linux clients and provides FTP/FTPS as well as IP SAN services. Access security is good as, along with local users and groups, the appliance can be integrated into an Active Directory domain.

Overland's SnapExtension apps provides extra features, but at the time of writing only two are available for the Snap Servers. The BitTorrent Sync app allowed us to create a private cloud on the appliance and sync data with desktops and mobiles running the free Mac, Linux, Windows, Android, Fire and iOS apps.

Snap EDR (enterprise data replicator) provides remote replication and disaster recovery services. With it loaded on the XSR 40, you can define it as a Snap EDR management station, link it to remote appliances or Windows, Linux and Mac systems with the agent loaded so you can backup, distribute or replicate selected data amongst them. 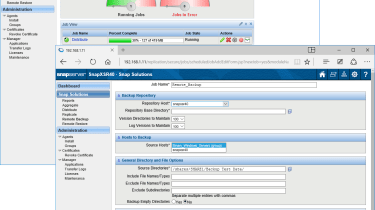 Storage pool snapshots are a valuable feature as these provide point-in-time backups for quick recovery. We could make them on-demand, schedule them at regular intervals and make snapshots available as NAS shares for drag and drop file recovery. 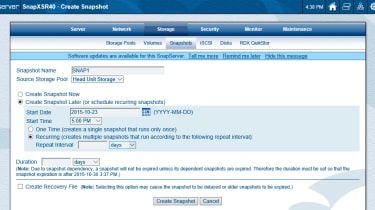 Overland's acquisition of Tandberg Data in 2013 gave it access to the popular RDX QuikStor products and support has been incorporated into GuardianOS. This allows USB RDX drives to be connected to the appliance and used as removable media for off-site storage or for transferring data from one appliance to another.

We connected an RDX drive to one of the appliance's USB 3 ports and watched it pop up ready for action in the web interface. With a 1TB RDX cartridge loaded, we could format or eject it and use the two-way copy feature.

This loads a new window with panes for the appliance and RDX drive where we could copy selected folders and files in either direction. Performance isn't great as copying 22.4GB of data from the appliance to the cartridge took nearly 16 minutes giving an average speed of only 24MB/sec. 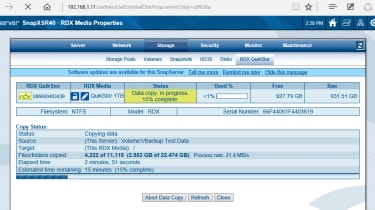 Our real world tests were more challenging as copying a 25GB test file to and from the share returned a read rate of 112MB/sec but a write rate of only 85MB/sec. The Atom processor also struggled with our backup test as copying a 22.4GB folder with 10,500 small files to the appliance averaged only 56MB/sec.

It was the same story for IP SANs with Iometer reporting read and write rates of 112MB/sec and 85MB/sec for a 500GB iSCSI target. We ramped the pressure up with a dual Gigabit Ethernet MPIO link to the target which mustered disappointing speeds of 166MB/sec and 140MB/sec.

As a simple business storage appliance, the Snap Server XSR 40 initially looks good on paper but its elderly Atom CPU will struggle with high usage. Overland's Snap EDR provides some easily managed backup and disaster recovery tools, but the XSR 40 isn't as feature-rich as similar appliances from vendors such as Qnap and Synology plus it's more expensive.