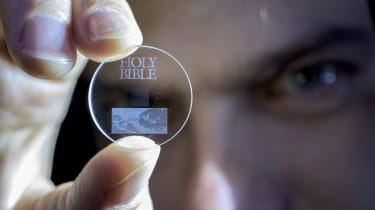 A revolutionary storage medium, capable of holding 360TB of data and withstanding extreme temperatures, will allow humanity's life and works to survive for "billons of years", its creators say.

Scientists from the University of Southampton's Optoelectronics Research Centre (ORC) have referred to the breakthrough technology, which uses nanostructured glass, as being akin to the memory crystals seen in Superman.

Known as 5D, the medium takes its name from the process of five dimensional digital recording that allows information to be stored on specially created glass by femtosecond laser writing.

The scientists say their ultra-compact technology has a thermal stability up to 1,000C, which at room temperature gives it a "virtually unlimited lifetime".

The prototype shown above measures just 25mm in diameter smaller than a 2 coin (28.4mm). Speaking to IT Pro, ORC team member and PhD student Ausra Cerkauskaite said the researchers would look to produce a standard-sized optical disc (12cm), which would then "ultimately fit about 360TB" more than 7,000 times a 50GB double-layer Blu-ray disc.

"Despite all technological progress it is still difficult to securely store large amounts of information over even relatively short timescales of 100 years. Our solution allows completely eliminating this problem. And this does fascinate us," Cerkauskaite said. 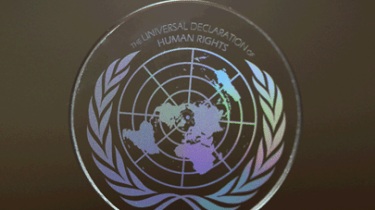 5D could be the start for a new era of colossal data archiving. The team at the ORC believes its technology could be highly useful for national archives, museums and libraries to preserve their records, photos and other documents.

The researchers first demonstrated an experimental version of the technology in 2013 when a 300KB digital copy of a text file was successfully recorded in 5D.

Now, they have managed to write historical and cultural work such as the Universal Declaration of Human Rights (UDHR), Newton's seminal work Opticks, the Magna Carta and the King James Bible to 5D.

"It is thrilling to think that we have created the technology to preserve documents and information and store it in space for future generations," said professor Peter Kazansky, from the ORC. "This technology can secure the last evidence of our civilisation: all we've learnt will not be forgotten."

The researchers are due to present their findings at SPIE Photonics West, an international optical engineering conference in San Francisco, this week.

The team is now looking for industry partners to further develop and commercialise the technology.

Cerkauskaite told IT Pro: "Our main goals now are to improve the speed of writing and develop the technology of microscope-free read-out drive that would increase the impact towards the realisation as mass-market technology."